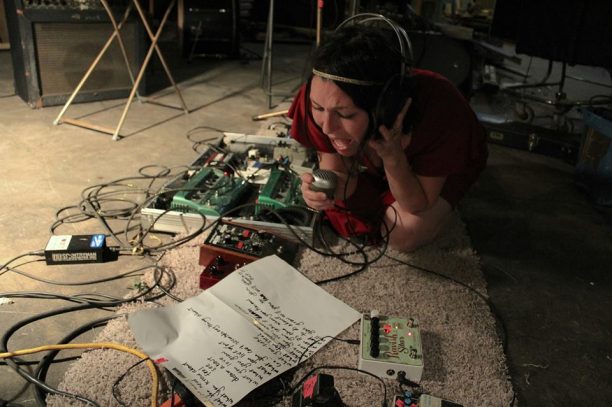 After perfecting their nuanced sound via touring and single releases, the shoegaze duo, Shana Falana, impressed critics with a 2015 debut LP titled Set Your Lightning Fire Free. Follow-up album, Here Comes the Wave is scheduled for a fall release later this year. The band’s sound hits all the right sensory marks dealing in positive wonderment and a sense of discovery. Vocals, as sung by singer/guitarist Shana, soar over chiming guitars and tom-tom drums, all of which keep pace with affected, drone-y guitars. Here’s Shana to re-cap the techie and creative side of things. 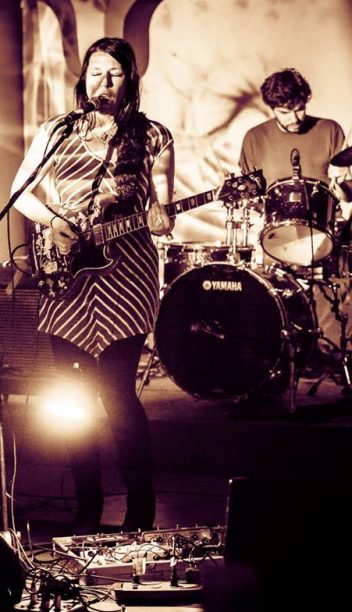 What records, events and thoughts inspired the new record?

“Cool Kids” is definitely an inspired song of the times. I wrote the lyrics and song just last year and for this release. I used to be intimidated by what I considered to be cool kids and wanted to take the name back. I think a lot of people struggle with feeling like an outsider, uncool, socially awkward. Afraid to be themselves for fear of rejection, they can become isolated and self judging, so much so that they resort to drugs and alcohol, food, self mutilation or even suicide. I never write “message songs” really, but this one is a love letter to those sweet hearts that seem to get lost in the shuffle of life–the ones you forgot. I think cool kids are people who think about others, who are kind, caring and compassionate. They are quietly making the world a better place. They are the ones who you might not notice, the ones who give back to their community and their friends.

It’s rare to find bands able to release two full albums in two years these days. How did you pull it off?

Well, honestly, I wrote a lot of music living in Brooklyn years ago. I had an opportunity to not pay rent for a few years so I took that time to just write a TON of songs. Those are the songs I’m releasing now. It’s helpful that I don’t need to spend this time writing. We also work very quickly in the studio. I demo everything before going in, I’m very organized and know ahead of time what I want to record, so that also makes the time more efficient and financially manageable.

Is inspiration a random blessing or can you set it in motion?

I really think it helps to have a partner. We inspire each other to work hard if nothing else. I know for a fact that I wouldn’t be as productive without Mike’s help (he’s my boyfriend, drummer and manager). I feel for solo artists–I was one for a long time–but after a while you run out of inspiration, especially if your career is taking longer than you anticipated! So it’s both a random blessing and you can set it in motion. Meeting him was truly a random blessing and he helps keep me motivated, but there are times when you just have to kick your own ass and keep moving forward… But it helps to have a team for sure.

The guitars in Here Comes The Wave sound smoother (and even drone-ier) than in the previous records. Was there a change in gear or a production choice?

Hmmm… that’s so interesting! I mean, I’m still learning how to write second guitar parts, maybe I’ve mellowed out a little? Not sure! We didn’t change anything, I always use a lot of delay pedals, fuzz, and a decent booster. I actually used almost the same setting across the board on all the second guitar parts [and use] the Echorec pedal from Catalinbread and a signal boost.

Did you recently come across a piece of gear you hadn’t used before that was instantly inspiring?

What’s on your board these days? 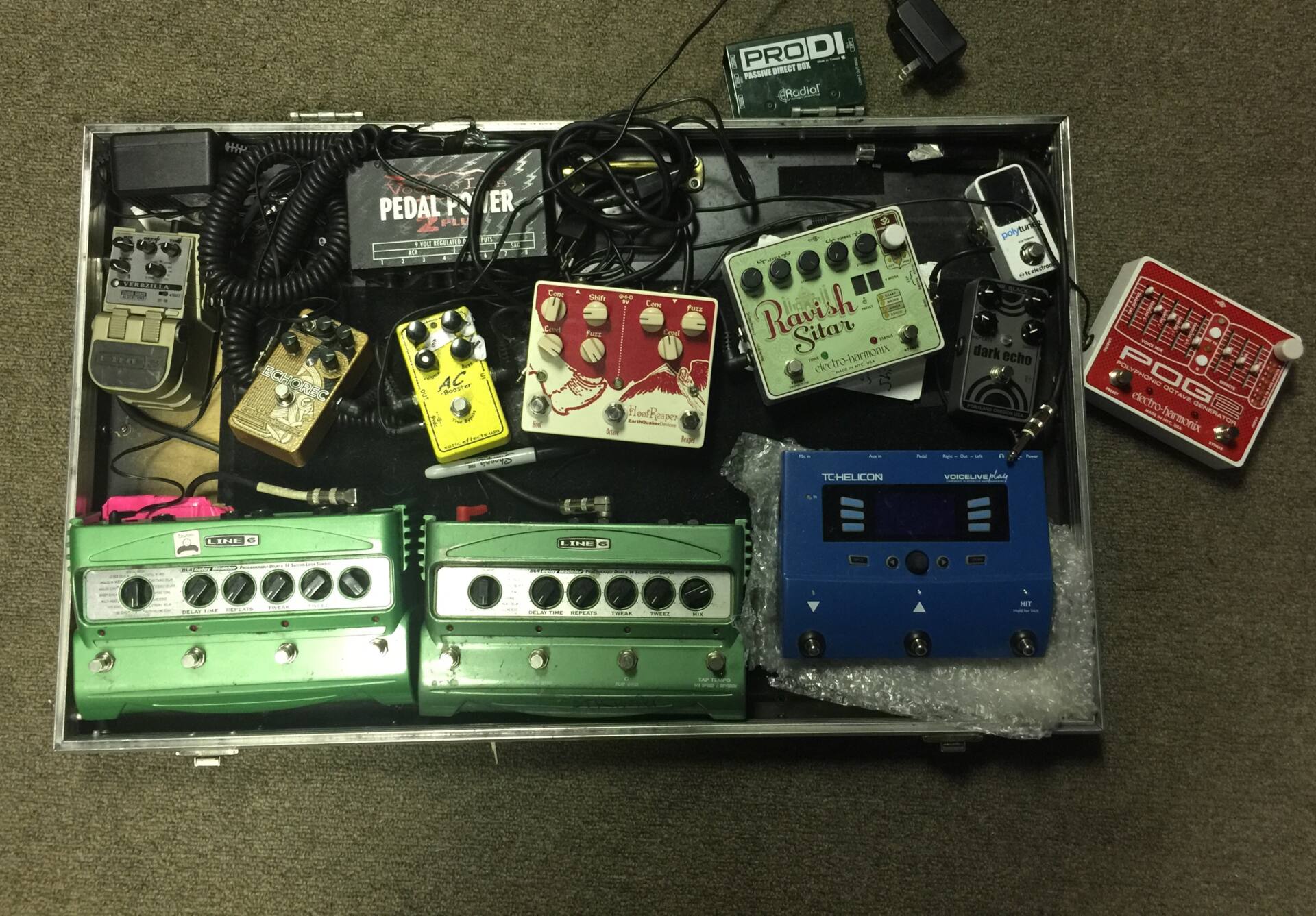 Do you use your amp for distortion or just your pedals? If so, which ones?

I don’t, I just the gain on the signal booster (adjusting between songs) and the Hoof Reaper.

How did your love for guitar effects begin and what was your first pedal? Was there a pedal that “changed your life”?

My vocal looping pedal love began when Jaleel of TVOTR left a DL4 at our shared rehearsal space and I took it over back in 2004. My guitar pedal love began when a friend gave me some Boss DD7 delay pedals and Blues Driver that he got at a garage sale. I remember using them and my mind just exploding with “Omg, this sounds like this band and that band. That’s how they do it.” My first and only pedal forever was a green soviet Big Muff, the real ones. My sound was that, my Ampeg Gemini I and my SG. I used the reverb on my amp for my guitar (I’ve always loved reverb) and that’s it!

Are there any quirks in the way you route your stompboxes, or is there anything else unusual you do with them?

Honestly, it’s a mess. If anyone wants to re-setup my pedal board… help. It’s like a messy closet with stuff falling off hangers and everything is twisted. It’s really embarrassing.

What guitar do you play and what’s the story behind it?

I’ve written every song on my Gibson 1968 SG. I’ve owned other guitars over the years, but I’ve gotten rid of all of them. I only use this SG, I don’t own any others. I bought it off my friend Eric in San Francisco back in 1994 after the neck snapped off of it for like, $200? Then it was $300 to fix. He had leant it to me because it has such a small neck and is lightweight which is really good for my small hands. It had a few stickers on it when I got it, but it’s now covered in stickers from all times of my life, I’m very sentimental about this guitar. 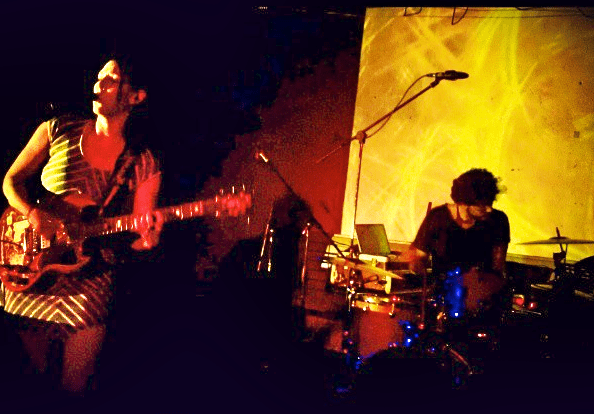 Is there a person outside the band that’s been important in perfecting your recorded and/or live sound?

Dan Goodwin has produced the last 2 records, and Mike Amari (drummer) co-produced more on this last one as well. We use backing tracks for the live show, and we use all the tracks from the record. I mix them, Mike mixes them and then Adam Armstrong helps with final mixing. It’s such a process the whole backing track thing, and it’s so reliant on the quality of the recordings to begin with, which thank god I’m working with talent like Dan, Mike and Adam, because it really becomes a science when mixing all of our bass frequencies etc. I’ve always wanted a band that sounds the same live as they do on the record, and we have that, but it is a bit of a mountain to climb after every new album to get those tracks to sound good in a basement house show and a big venue. Mostly we cart around my Ampeg SVT bass amp (I start by mixing through that). It has subs in it, so when I have that with us there is consistency no matter what.

What other NYC bands have you been listening to in 2016?

I’ve been a fan of Monogold forever, I also love Air Waves and DLE… I just played a show with Kristin Kontrol and got into her new record, and my friend Quitzow just made a beautiful record that should be coming out next year. She’s an amazing solo electronic artist in Brooklyn. I’m going to see TEEN play tonight, they’re awesome too! So many incredible bands coming out of NY… I’ll get in trouble if I don’t stop now!