About Delicious Audio (and The Deli) 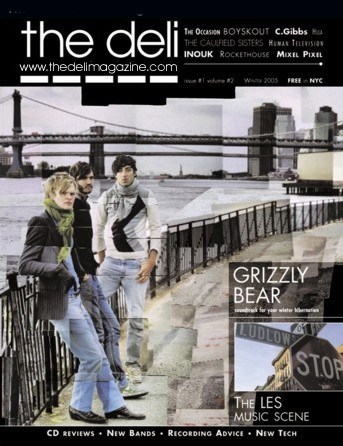 The first Issue of The Deli Magazine (2004), a publication exclusively focused on emerging NYC bands.

Everything started in 2002 when I moved to NYC – a music scene I was obsessed with – and started volunteering as a wannabe producer in a recording studio called Mother West, owned by Magnetic Fields’ producer Charles Newman. His studio was in a converted Chelsea apartment on top of an old Deli.

Charles used to print a photocopied fanzine called “The Deli” to promote the bands he was producing, but after three issues he had stopped publishing it. I’ve always been interested in making music and writing about it, and became obsessed with the idea of (trying and) revamping that little publication. I decided to give it a local angle and to focus exclusively on “emerging” artists. The NYC scene was thriving at the time (think Interpol, Yeah Yeah Yeahs and TV on the Radio all making waves at once while Animal Collective, St. Vincent and Grizzly Bear were ready to pop (among many others). Support for that idea from local and national companies targeting musicians followed suit.

In December 2004 at Manhattan’s Sin-é on Attorney Street, a little known trio called Grizzly Bear played the Deli’s launch party – the band was featured on the cover of the 1st issue of The Deli.

Printed quarterly, the Deli soon became a staple of the scene, and the concept expanded online to cover several other cities through dedicated blogs. After the first few years, when doing a ton of work for hardly any money felt actually exciting, it became obvious that print and online ads were not going to sustain what I was doing. I had to figure out a way to branch into events – other than financially ruinous ones like live shows involving emerging local bands!

After some brainstorming, the Stompbox Exhibit was born: the first compact, entirely in-the-headphones event for guitar pedals. Its first edition was held on Ludlow Street at The Living Room’s Googie’s Lounge during the 2011 edition of the CMJ Music Marathon.

The show grew incredibly quickly, and so did the coverage of pedals in The Deli, which obviously became a vehicle to promote the Stompbox Exhibit and its sister event the Synth Expo. 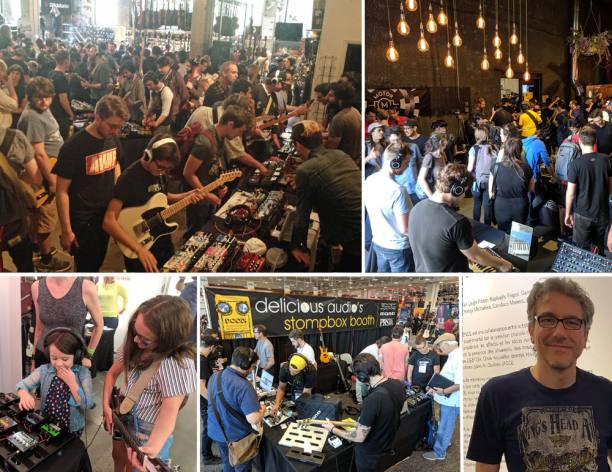 Images of the early Stompbox Exhibit and Synth Expo. The bottom center image is a photo of a NAMM Stompbox Booth.

Around 2013 I realized the Stompbox Exhibit needed its own site, separate from The Deli. That’s when Delicious Audio was born. A big update to the site in 2017 transformed it into its current blog/aggregator form.

The Deli as a print magazine lasted until 2019 (you can read digital versions of the issues here and here). In the winter of that year, the first print issue of Delicious Audio was born.