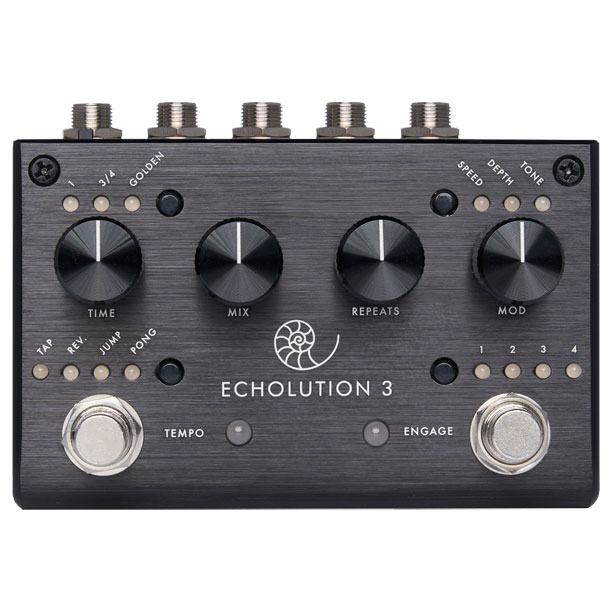 NYC’s Pigtronix has released a lot of different pedals since its launch, but none has gone through as many variations and evolutions as the appropriately named Echolution, a stereo Multi-Tap pedal with modulation and, in some versions, filter. Today the company announced the Pigtronix Echolution 3, which expands the delay time to 5 seconds – let’s check it out.

At a first glance, the most obvious improvements are that V3 is hosted in a much smaller case and cleverly expands the innovative push-button system found in the previous version, employed to select various functions:

Three knobs let you control the delay’s Time, Mix, and Repeats, although the time can also be set via Tap Tempo.

Here are the first videos of the Pigtronix Echolution 3, they do a good job in showcasing this pedal’s functionality and sound.

A DIMENSION WORTH GETTING LOST IN.
Echolution 3 is a multi-tap stereo modulation delay offering a myriad of sound design options including reverse, jump, pong, modulation tempo sync, variable low pass filter, flexible signal routing and comprehensive MIDI control. Delay times ranging from 100ms to 5 seconds can be dialed in using the Time knob or via Tap Tempo using the left footswitch. A second delay tap can be set to the same length or a fraction of the main delay time to create rhythmic echoes. The ¾ fraction creates a dotted eight note delay, while the Golden fraction uses the sacred geometry of the Golden Ratio (.382) as the multiplier for the second tap. The multi-tap settings can be even further enhanced by the stereo ping pong effect, which causes the different delay taps to switch sides on each repeat. Store up to 4 presets, unlock hidden features with the Universal Remote footswitch, and design yet unheard delay lines. Runs on standard 9VDC.

KNOB-BY-KNOB
Time: Sets the length of the delay line. Overrides tap tempo and vice versa. Select sub-divisions with the small push button. Can activate any two sub-divisions at once.

Mix: Sets the volume level of the delay signal.

Repeats: Sets the amount of regeneration in the delay line.

Preset Select: Push to toggle through presets, press and hold to select. To save a preset after making changes, press and hold. Presets can be toggled and selected using only footswitches (see manual).

BREAK RULES AND BUILD WORLDS
Designed to offer a streamlined user experience and a massive feature set, Echolution 3 is a worldbuilder. In a compact package, “E3” offers multi-tap delay lines, with sound design FX options ranging from the subtly cinematic to the outlandishly dramatic. I/O options include stereo output, MIDI sync, and additional footswitch features. On board presets make revisiting your favorite corners of the Echolution 3 universe simple.

HOW TO DISAPPEAR COMPLETELY
Marvin has come across Echolutions in the Pigtronix universe before—but never quite like this. Echolution 3 is a supermassive black hole leading to a vivid dimension stuffed with color, light, and the unexplainable, causing the voyager to lose his or herself more deeply than they knew was possible. In this dimension, the imagination tends to expand: familiar figures appear in cloud formations, meteorites can be sat on like bean bag chairs, and ropes of light can be swung on like vines.