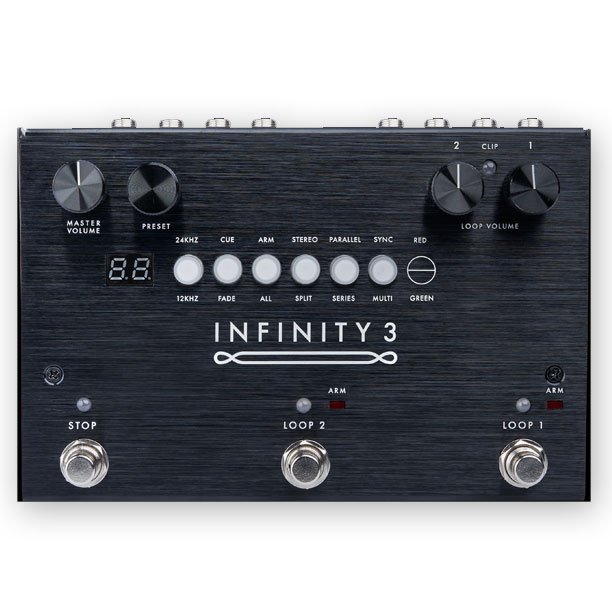 As usual for looper pedals there is a lot to unpack, but the emphasis on this release is on instantaneous commands, record low latency, and recording quality that matches the one of a tape recorder.

The video below gives you a quick summary of the Pigtronix Infinity 3’s specs and functions. More details in the description under the video.

Infinity 3 is the world’s most musical looping pedal. Simple to operate, yet tremendously powerful and flexible, the Infinity 3 guarantees latency-free looping. Our state-of-the-art platform provides instantaneous record, playback, dub, undo and redo, on two stereo loop pairs that can be played in series or parallel as well as synchronized and cue’d for automatic playback. On top of superior speed and a unique, performance-friendly feature set, Infinity 3 sounds downright incredible thanks to its discrete analog limiter stages, transparent analog pass-through and 24 bit HD recording engine with variable sample rate that can be incremented in semi-tones over two octaves. With approximately 3 hours of recording time on up to 50 loop pairs, the Infinity 3 was designed to inspire compositional depth and engaging performances. Comprehensive MIDI control and intelligent MIDI clock jitter correction provide the ability to link the Infinity 3 to a DAW, Drum Machine or other effects pedals. Infinity 3 is the ultimate tool for writing, rehearsing and performing every style of music.

Red/Green — A key corresponding to center buttons. When any button is red, the feature written above the button is active. When green, the feature below is active.
Sync/Multi — Sync options for Loop 1 and 2. Red for a synced 1:1 ratio, Green for Multi (press and hold to set how many times longer Loop 2 is than Loop 1).
Parallel/Series — Playback options for Loop 1 and 2. Red for Parallel playback, where Loops 1 and 2 can be played on top of each other. Green for Series, for verse/chorus-style looping. Push and hold to access expression pedal functions menu.
Stereo/Split — Input options. Red for standard looping, where all inputs record to each loop. Green for Split, where each input is assigned to its own Loop. Push and hold for Remote Switch pitch interval menu.
Arm/All — Command options. Red for Arm, where only the armed loop receives stop/play commands. Green for All, where both loops receive stop/play commands. Push and hold for loop aging menu.
Cue/Fade — Red for Cue, where actions occur at the loop boundary once triggered. Green for Fade, where Loop audio fades until end of current cycle once stopped. Push and hold to access menu to set number of cycles over which Loop audio fades. Off for instant stop.
24kHz/48kHz — Fidelity/sample rate options. Infinity 3 automatically records at 48kHz. Use this button to change the rate at which you record, or use it after recording a loop to change the speed, and therefore pitch, of your recorded audio. Standard options are 12, 24, and 48 kHz, resulting in octave jumps. Push and hold to access the LED menu to toggle through sample rates based on musical intervals.

Utilizing state-of-the-art technology to achieve previously unheard audio fidelity out of a foot pedal looper, Infinity 3 was designed to offer the most musical experience possible. Commands are instantaneous—meaning what you put in is exactly what you get out. Jam-packed with features, Infinity 3 allows for every looping possibility, including MIDI-sync options, stereo split inputs, and extra features via the Pigtronix Universal Remote.

An unassuming-looking but infinitely complex world of looping the likes of which we have never seen. It may be mind-bending at first, but we promise it’s habitable once you give it a chance.