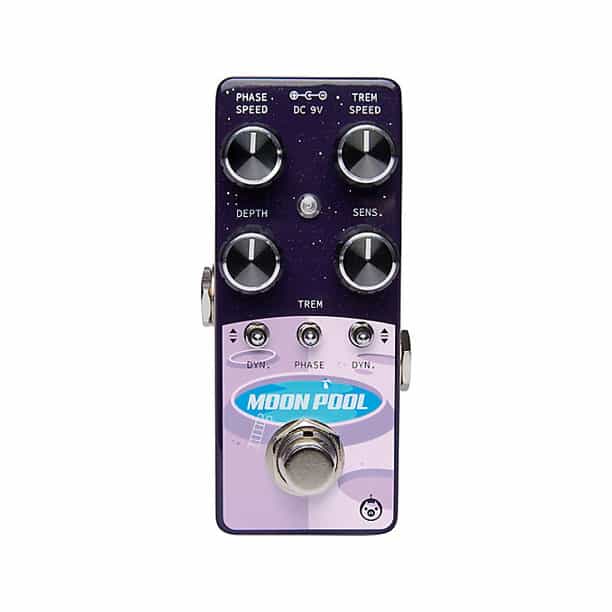 The Pigtronix Moon Pool Tremvelope Phaser (or how about TremveloPhaser?) was announced during NAMM’s Believe in Music 2021 together with two other rather spacey looking mini pedals, but it was the only one lacking a video, which is now available. As you know, a pedal (or any other musical device) doesn’t really “exist” until folks can hear how it sounds!

The Moon Pool is an analog 4-stage phase shifter and bias tremolo with independent speed controls featuring the ability to change the rate of one or both of the effects depending on your playing dynamics. The two effects can be run separately or together.

The envelope tracks your dynamics through the Sensitivity knob, and you can choose to adjust either effect’s response to it through the two side Dyn toggle Switches (Middle = no change, Down = decreases).

Moon Pool is an analog phase shifter and tremolo with independent speed controls featuring the ability to change the rate of one or both of the effects in either direction, corresponding to how hard you play. The 4-stage, VCA-based phaser and variable bias tremolo found in the Moon Pool can each be run as standalone effects or they can be combined in series for a mesmerizing mashup of modulators. A global Depth knob determines overall wetness, while a Sensitivity knob allows you to dial in the responsiveness of these changes to accommodate different playing styles and colors. Runs on standard 9VDC.