Western MA-based GIRAFFES? GIRAFFES!  is one of those bands crafting deliciously head-spinning math-rock licks so labyrinthine, that you’d imagine it’d be tough for even a full four or five piece band to execute. So, when you hear that their music is the work of solely Joseph Andreoli (guitar) and Kenneth Topham (drums), it’s more than a little dizzying to think about how the duo manages to pull it off. Luckily for us, Joesph was kind enough to give us a behind-the-scenes look at the pedals he uses to create GIRAFFES? GIRAFFES! expansive sound.

My pedalboard lives in a very fluid state. From week to week, I’m always switching pedals in and out, trying different sounds, configurations, and experimenting. My main board for whatever project I’m focusing on is a Pedaltrain Pro, and I have an auxiliary board–a Pedaltrain 2–that is supposed to fit all the remaining pedals, but there’s a lot of overflow happening right now… you know how that goes. I try to sell or trade anything that I’m not really using. I’d rather have it out in the world inspiring someone than having it sit, collecting dust.

Right now GIRAFFES? GIRAFFES! is writing our fourth LP and these are my boards:

Boss TU-3S: Simple, always-on tuner. Sometimes if I need more space, I’ll take this off and use the built-in tuner on the Eventide PitchFactor.

Digitech Whammy 5: I’ve been using the Whammy forever and it’s pretty major to our sound. Since GIRAFFES? GIRAFFES! is a guitar and drums duo, I really need pitch-shifters and octave pedals to help give me a full sound. I mostly use it with the harmony set to octave up or down and frequently use the treadle to easily change from one to the other quickly during a song.

Montreal Assembly Positive: This spot in the chain is usually a low-gain/boost type pedal that I keep EQ’d pretty flat. It’s for boosting lead lines, helping tapping sequences push through, or for adding a bit of hair to a section. I usually have a Fulltone OCD here, but I’m mixing it up with the Positive.

MadeByMike DreamBox: This is one of my favorite pedals! It’s a dual drive based on two pedals used on the Smashing Pumpkins Siamese Dream album. One side is his take on the old MXR Distortion II pedal and the other is a ’78 Big Muff clone. Each side can be used independently or together. I use the distortion side for soloing and for stacking on top of the Positive/OCD during heavy parts and I use the fuzz side for when I really want to get really shreddy. Both sides together is fuzz heaven with tons of sustain. My board can be a real pedal battleground and the Earthquaker Devices Palisades sometimes knocks this off for a bit. The overdrive/distortion/fuzz area of my board is probably the most hotly contested.

Chase Bliss Warped Vinyl: My newest pedal. An analog chorus, controlled digitally. The signal is really rich and it nails classic chorus, but the digital brain lets you really get out there with crazy parameter control. And, it has presets! I have a preset for a vintage style chorus and the other is a real swampy, sea-sick, warbly sound. 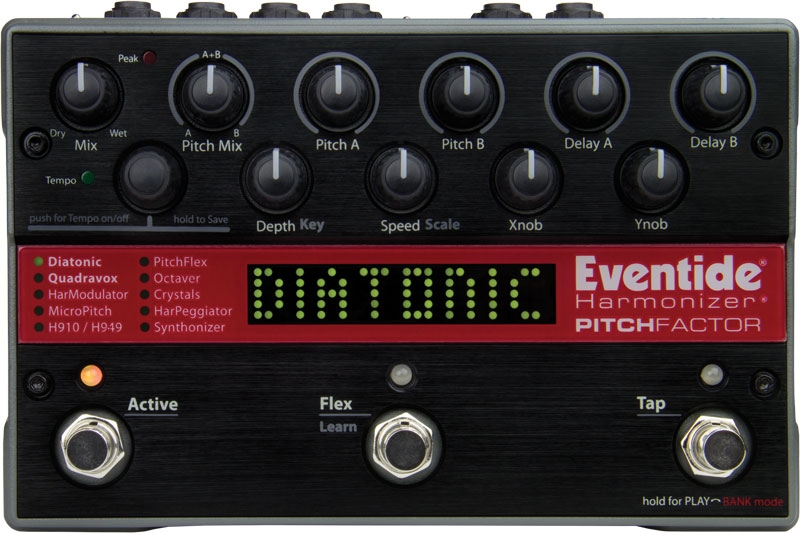 Eventide PitchFactor: The PitchFactor is a monster! Pitch-shifting harmonies with independent delays?! This pedal can do so much stuff, it’s really a multi-tool utility. Sometimes I need a three part harmony, sometimes I need a delayed octave, or sometimes I need something that sounds like “boing”! Tons of presets for whatever I need. I use the Barn3 Ox pedal with it to easily bank up and down and control other parameters- it’s essential.

Eventide TimeFactor: I mostly use it for long, clean digital delay sounds and a stutter type of sound. There are lots of pedals that do a stutter sound in different ways- commonly by

grabbing a very short piece of the signal and essentially looping it over and over. I like a little more dynamic if I hold my stutters longer, so I set a very quick delay with high repeats. When I engage it, it does the stutter, but it also oscillates up into a volume blast. l I used to use a Boss DD-3 for this, but recently have expanded into the TimeFactor to explore it’s other delay sounds (like reverse) and its built-in looper. Strymon El Capistan: Another one of my favorites that is almost always on my board. Though digital, it’s some of the most organic tape-echo sounds I’ve heard in a pedal. I use it with a pretty long echo on solos and more spacey moments. It sounds so good! Strymon Flint: This is another great pedal from Strymon. It’s a dual pedal- one side is a reverb and the other is tremolo. I mostly use it for the reverb- either a light room or huge hall depending on what I’m doing. I don’t use tremolo a lot, but when I do, I have it really choppy and chunky. A cool thing about this pedal is you can assign the order of the two sides and I have the tremolo feed into the reverb- so it’s choppy, but it trails a little and has body.

Boss RC-300: GIRAFFES? GIRAFFES! has always done a lot of looping. I started off looping with a Boss RC-20 and an Akai Headrush, but have upgraded over the years. The RC-300 is essentially three loopers in one and I have song presets saved for the right configurations. For example, I might have two of the loopers in sync with each other and the other a sort of a free-floating loop for ambient sounds. Having the three loopers has been really helpful with transitioning out of loops–this way, I can treat it like “steps down stairs” and not always have loops end so abruptly. The only thing is that I wish it was smaller–it takes up so much space! I’m tempted to hacksaw off the expression pedal, but I think that would just break it.

All these sounds get fed into an Orange AD140 and CR120 with Orange cabs. I’ve been using Orange since the early 2000s and it’s been a good fit. With these amps (and their wattage) there’s enough headroom to really crank it without it breaking up too much and I still have a warm, cleanish, sound that’ll take pedals well.

For guitars, I use a Fender American Vintage ’62 Jazzmaster (with Curtis Novak Wide-Range Humbuckers), a 1974 Guild S-100, and a modern Guild S-100 – all with Ernie Ball Slinkys.

An example of some of these pedals in action is this GIRAFFES? GIRAFFES! song, “SugaaaaaSpazzazazz”. The song starts with the Fulltone OCD and Digitech Whammy on harmony octave down into a weird patch I made in the Eventide PitchFactor. After the intro, it goes into the verse and I use the Boss DD-3 for a stutter, the Whammy for “whips”, and the PitchFactor for a “boing” type sound. In the chorus I use the Whammy for more “whips” (I’m a sucker for that “whip” sound). Second verse, same as the first, but I slow down a section at 2:02 with the Strymon Flint reverb on. Chorus again. Then at 2:28 I record Loop “A” on the RC-300 and let it play back once. After this, we transition back into the verse and then go into a new section which I loop on a different track on the RC-300 (I have the loops programmed to be independent). After this Loop “B” is set, I play on the top of it and then kill it when we go back to the chorus. After that, the song falls back into me triggering Loop “A” and since it’s all ready to go, I can immediately unleash the soaring fuzz of the Dream Box. I loop some light to moderate shred on top and then we’re out.