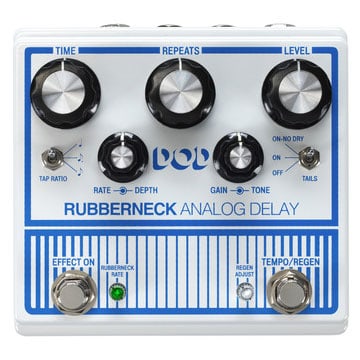 The DOD Rubberneck delay is one of the most interesting pedals released by DOD, and it became a staple in the roster of a pioneering brand that’s been known for rather streamlined stompboxes.

The Rubberneck, streamlined is not: based on four Bucket Brigade chips, it’s an analog delay with tap tempo, deep tweakability of delay and modulation, and unorthodox footswitch functions (customizable momentary control of oscillation and momentary control of the pitch sweep – check out the second video below around 1:20 for a quick intro).

It’s equipped with a number of controls that allow the user to shape the delay sound to their liking. The “Time” control adjusts the length of the delay, while the “Repeat” control determines how many times the delay repeats. The “Mix” control allows the user to blend the dry, unprocessed guitar signal with the delayed signal to achieve the desired balance.

One of the standout features of the DOD Rubberneck Delay is its “Mod” control, which adds a subtle pitch modulation to the delay repeats. This gives the delay a “warbling” effect, similar to the vibrato on a vintage tape delay. The “Mod” control allows the user to adjust the depth and rate of the pitch modulation, allowing for a wide range of tonal options.

The Rubberneck also features a “Tails” switch, which determines whether the delay repeats continue to sound after the pedal is switched off. When this switch is engaged, the delay repeats will fade out naturally, rather than cutting off abruptly. This can be a useful feature for creating smooth transitions between sections of a song or for achieving a more organic feel in live performances.

We added this pedal to our list of Best Analog Delays.

And here’s the two-part demo of the Rubberneck by Pro Guitar Shop.

The new DOD Rubberneck Analog Delay has double the features with the cool new double-wide chassis. The Rubberneck boasts over a second of warm and musical 100% analog repeats you crave, along with tap-tempo, subdivisions, and tails. Double concentric knobs give you independent control of the Modulation Rate and Depth as well as Gain and Tone of the delay.

The Rubberneck also has jacks to allow FS3X 3-button remote foot switching, and a send and return so you can add external effects to the delay path.