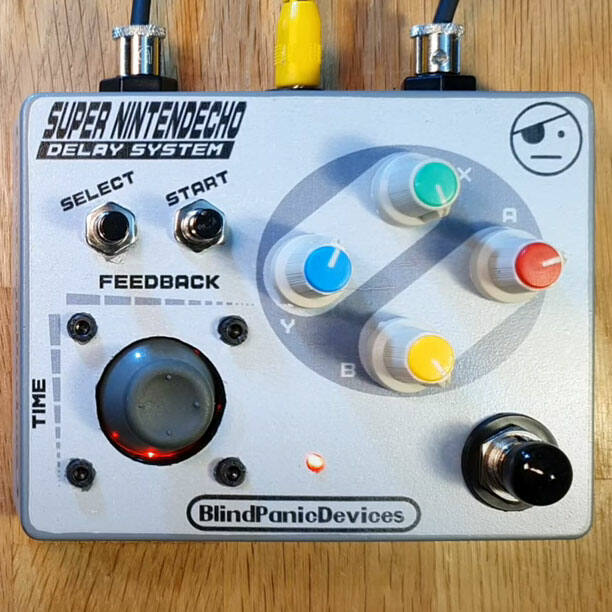 Built by a small UK builder without a website (yet), the Blind Panic Devices Super Nintendecho is a delay to be released in 2023 based on the PT2399 chip with some quirky and original features obviously inspired by everyone’s favorite vintage gaming console.

Just like that console’s controller, the Super Nintendecho features a joystick at the bottom left of the case that controls Time (vertical axis) and Feedback (horizontal axis). This lets you easily modify both parameters at once with your foot.

The thumbstick can be clicked by pressing on it, which kills the feedback, so with long delay times you can use that for more stutter/glitchy noise effects too.

The four colored knob on the right section of the pedal are extra controls setting Time (X), Tone of the Repeats (Y), Dry (B), and Wet signal (A).

We wondered why there are two controls for time (Y and the vertical Joystick axis), so we contacted the builder about it, here’s the reply:

The Y knob controls the full delay time, up to around a second. The joy stick lets you shift the delay time up and down from where the time knob is set.

As usual with PT2399 chip, the repeats degrade in quality and clarity the longer the delay.

Two buttons on the top left, designed to be activated by hand, trigger momentary effects: the Select button turns down the delay time to its minimum setting, which can create some crazy frozen/stuttery sounds when the repeats (X knob) are set on long.

The Start button, on the other hand, turns up the setting of the repeats to the maximum, triggering oscillation and dangerously loud volume swells.

Check out the first demo of the Blind Panic Devices Super Nintendecho, it will be shipping early next year.

The Blind Panic Devices Super Nintendecho is a PT2399 delay, with dry + wet volume knobs, tone control for the repeats, momentary buttons for both ramping and halting the repeats, and of course, a joystick to simultaneously adjust the delay time and feedback.