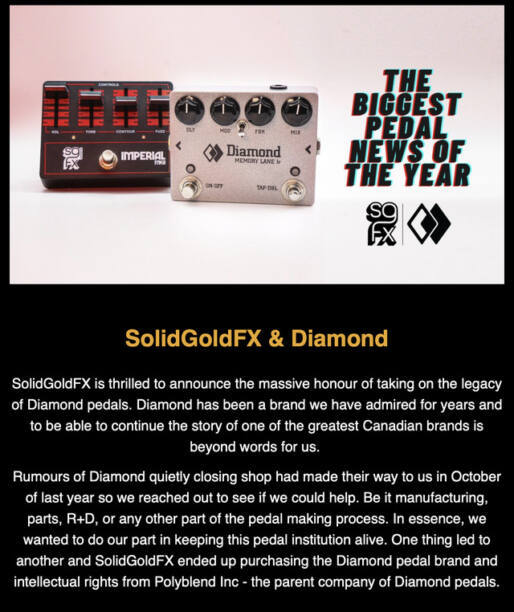 Well, that is some news!

For the unaware, Diamond is a Canadian effect company that was known in particular for their high-quality delay line called Memory Lane, launched in the late aughts.

The use of digital technology in Diamond pedals was a major factor in their popularity and success: it was one of the first companies (if not the first one) to use digital signal processing (DSP) chips to achieve long delay times with minimal degradation of the original signal. This was a significant improvement over older analog delay pedals, which tended to produce more noise and degradation of the signal as the delay time was increased.

Diamond pedals were also known for their flexibility, with a wide range of delay times and effects available, as well as the ability to save and recall settings.

The company has been rather quiet for several years now, with releases becoming increasingly sporadic, but their Memory Lane line is still very sought after.

The acquisition by Montreal-based SolidGoldFX came with the promise to resume production and new releases.