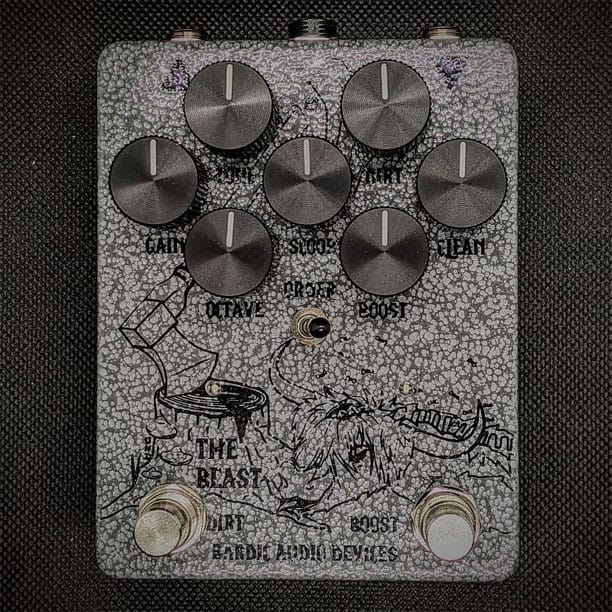 Michigan-based Bardic Audio Devices focuses mostly on bass pedals, but their Beast Distortion/Fuzz is bound to find a fan-base among guitarists with noisy tendencies.

The Beast is a very tweakable dirt box based on an op-amp design, with a separate clean boost channel with a blendable Octave-up that adds up to 20db of volume.

The trick up this pedal’s sleeve is that the Gain, towards 35-40% of the knob’s rotation, transforms the dirt section from a distortion into a Muff-style gated fuzz.

An Order toggle switch allows to reverse the order of the dirt and boost sections: in the Left position, the Boost comes before the first section, therefore adding saturation to it. In the Right position, the boost comes after, therefore pushing the dirty signal at a higher volume to your amp. In either position, the clean tone of the boost/octave channel can be blended into the final output through the Clean knob, while a Dirst knob also lets you control the output of the distorted signal.

A fair amount of tone-sculpting can be achieved through the Tone and Scoop knobs (the latter simply applies a mid-frequency scoop).

Check out this sonically crushing video by Noise Generator of the Bardic Audio Devices The Beast.

The Beast is named for its sound. The discrete op-amp distortion is a true monster. Depending on the gain setting, the dirt section can morph between an open and aggressive distortion into a tight gated fuzz. The big muff style tone control paired with a variable mid scoop control can tailor the tone of the dirt section to whatever your heart desires. There is also a boosted clean channel that can mix with the dirt signal to add more low end with bass or more clarity with guitar. The clean channel resembles the clean channel of a tube amp, so with the boost engaged even that can become distorted! The boost section can pummel the main dirt section into tomorrow with over 20dB of gain on tap! The boost also has a mixable octave up, which is perfect for lead lines and solos. The Beast is a one stop shop for all your distortion and fuzzy needs.

Gain: Controls the gain of the dirt channel. In the last 35-40% of the knob’s rotation, the dirt section transforms from a distortion into a gated fuzz.

Tone: Cuts high and low content depending on its position.

Scoop: Changes the mid scoop of the tone control. Goes from heavily scooped mids, to a flattened mid response.

Octave: Varies the amount of octave up in the boost signal.

Order: Controls the order of the dirt and boost sections. In the right position, the boost comes first in the chain.