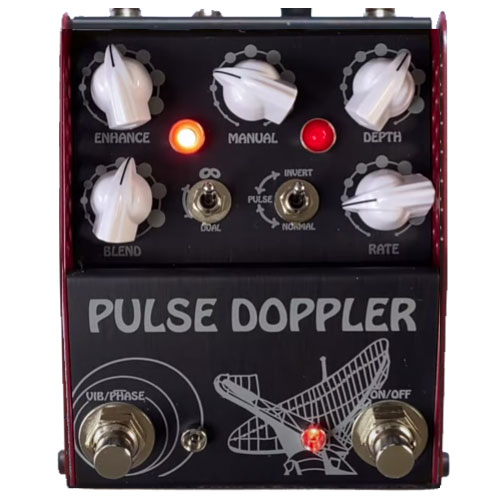 UK’s ThorpyFX is back at it with a new, rather peculiar modulation pedal, the Pulse Doppler, which follows two more classic takes on Chorus (the Oggin) and Flanger (Camoglange). In this optic, the new release seems to round up nicely the company’s modulation offerings, since this analog device can deliver anything from phaser to vibrato to tremolo.

Just like the two previous pedals, the Pulse Doppler was designed in collaboration with circuit engineer Dan Oggins of Lovetone fame – and who is now officially part of the Thorpy team.

An original design built from the ground up but somewhat inspired by the Lovetone Doppleganger phaser, this pedal was designed to provide a wider range of modulated classic and unique sounds through five knobs (Depth, Rate, Blend, Enhance, and Manual) and two toggle switches.

Uniquely, the signal is into two frequency bands (referred to as “notches) and the Manual knob sets the default notch for the filter frequencies (i.e. the frequency where lows and highs are separated), but also controls the range of the LFO sweep.

The two toggle switches are central to this pedal since they change the effect’s sonic character.

Here’s a quick summary of what the right toggle does – it’s basically a “mode” selector:

• Normal: simple phaser
• Pulse: applies the modulation to a high pass filter, for an original tremolo/autowah/phaser effect
• Invert: flips the phase of the wet signal producing a more hollow sound due to phase cancellation

And this is what the left toggle does:

• Normal: no effect
• Offset: the two frequency notches oscillate against each other -this produces some very intriguing and different results in each mode.

Listen to the ThorpyFX Pulse Doppler in the videos below.

The PULSE DOPPLER PHASER is the first design ThorpyFx has released since Dan Coggins became a full time member of the team.  This fully Analog Phaser is a MKII version of the Doppleganger, taking all that was great about that vintage pedal, mixing it up, distilling it  and releasing a more compact, and easier to utilise version. It was designed from the ground up to provide the most incredibly versatile and original phaser sounds with an insane  level of versatility from an analog effect.

With rotary controls for Depth, Rate, Blend, Enhance, and Manual coupled with two toggle switches and two footswitches this analog pedal keeps it functionally simple but is a deceptively feature packed beast. For stereo pedal enthusiasts, they will be pleased to know that the Pulse Doppler has both dry and wet outputs. This pedal allows you to deliver an almost unlimited tonal pallet no matter what your mood/style or guitar and amp setup. The premium sound is enhanced through the use of premium components all wrapped in a beautiful custom engineered enclosure.

Each pedal offers the following features: