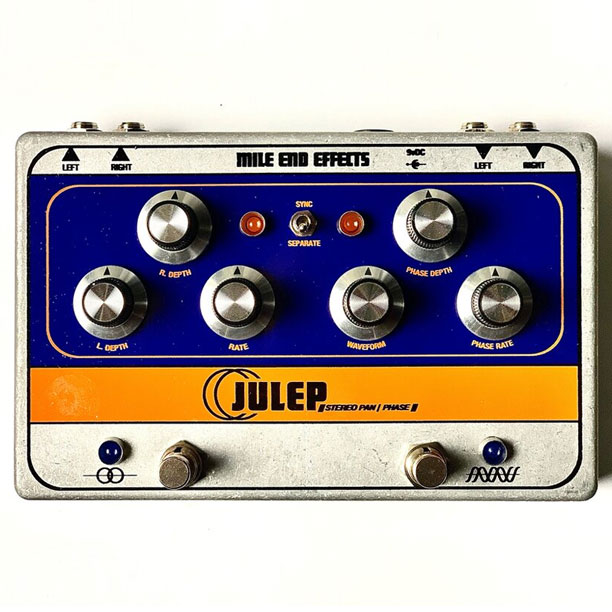 Some pretty sweet effects pedals are coming out of Montreal these days (and also this very blog, for that matter!). The Mile End Effects JULEP is the latest creation of Justin Cober, the one-man-stompbox-maker whose pedals sell out within days of release – and yes, the same can be said for this take on the infamous Ibanez FP-777 Flying Pan.

The Julep is a versatile optical stereo panning/tremolo and phasing effect that can produce a wide variety of sounds with variable waveform, with the possibility to set separate depths for left and right channel.

The two effects run in parallel and have separate footswitches and controls.

The subtle, vintage-voiced Phaser can be turned on through a dedicated footswitch and, with the right setting, can get into rotary/uni-vibe territory. It only features two controls: Depth and Rate.

The Waveform knob, although on the phaser’s side, is actually applied to the tremolo, affecting its stereo LFO wave and producing triangle, square pulses and everything in between.

The Tremolo has also a Rate control, and, as mentioned, separate Depth knobs for the Left and Right channel.

A toggle switch in the center of the pedal, named Synch/Separate, synchronizes the tremolo’s panning between the stereo outputs or separates the two signals by 180 degrees for a wider sounding effect.

This pedal looks really cool, but good luck finding it!

– a sweet flavoured drink made from a sugar syrup, sometimes containing alcohol or medication.

– the big orange on Décarie Blvd.

From syrupy, frothy vibe effects to dizzying, choppy stutters, the Mile End Effects Julep is by concept a semblance of the infamous Ibanez FP-777 Flying Pan, but functionally and electronically is an expansion and improvement on the idea. This optical stereo panning/tremolo and phasing effect gives a wide variety of sounds with variable waveform sculpting, independent depth controls for both left and right channels, a vast sweep in panning/tremolo rate from a slow crawl to a worried tremble and a subtle, vintage voiced phaser that at certain depth settings will take you into rotary simulation/uni-vibe territories and viscous swirls saved only for the finest lysergic experiences (…or for a cold, refreshing orange juice beverage with an egg mixed in…).

Send the stereo outputs from this pedal to 2 different effects chains for all kinds of panning possibilities, run the outputs to two separate amplifiers or use the pedal in mono for a simple, but versatile tremolo and phaser.

R.DEPTH – depth of right side tremolo

WAVEFORM– triangle, square and everything in between panning/tremolo wave shape

PAN ENGAGE – turns on the panning/tremolo

PHASE ENGAGE – turns on the phasing

The JULEP requires 100 mA at 9VDC with the typical 2.1mm centre negative power supply connector. It is also True Bypass.