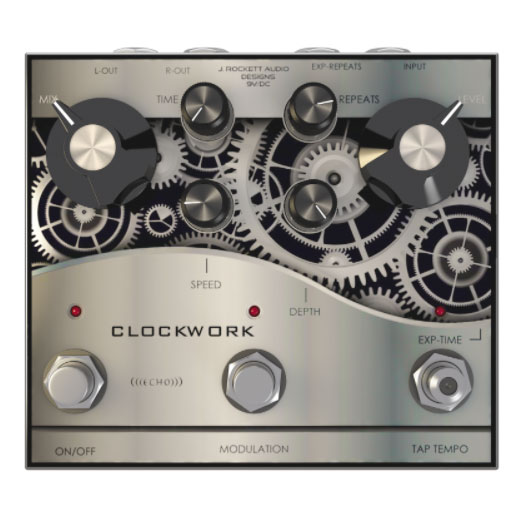 Designed in conjunction with Howard Davis (Creator of the original Deluxe Memory Man) the J. Rockett Clockwork Analog Echo is a classic BBD delay with modulation featuring a true stereo output (i.e. one side out of phase) and Tap Tempo function (which is a digital function, but doesn’t affect the signal).

Two Expression inputs allow control of Time and Repeats, while the center footswitch triggers the modulation circuit, whose speed and depth can be controlled through the two smaller knobs at the bottom. The modulation section can deliver chorus, rotating speaker and flange sounds.

Here are the first videos of the J Rockett Clockwork, which is now shipping.

Support our channel and buy this pedal at Sweetwater at no extra cost!

Designed in conjunction with Howard Davis (Creator of the original Deluxe Memory Man). This is old school meets new school. Classic BBD delay chips that are digitally controlled for tap tempo only. True stereo output (One side out of phase) (2) Expression pedal inputs to control Time and Repeats. Foot switchable modulation with speed and depth. “Always On” boost which can be used whether the delay is engaged or not. Experimenting with the modulation controls will get you chorus, rotating speaker and flange sounds. This is as musical as an echo can get, go from lush long delays to amazing room like slap back echoes. Repeats can be set short enough to achieve chorus/flange sounds and long enough for crazy long repeats into oscillation if you so desire.

MIX – Use this to blend your dry signal with your wet signal. The wetter the mix the more apparent all functions are. You will find the perfect blend for your needs but don’t be afraid to go over the top.

LEVEL – Use this to control the pedal’s output level. This function works even if the delay is not engaged giving you a very nice push. The delay will always stay relative to the volume output so you will not have an out of balance mix between the two

TIME – Use this to control the delay time from almost imperceptible (which creates chorus and Leslie sounds) all the way to 600ms of delay for the long lush sounds.

REPEATS – Use this to control the amount of repeats. Go from one repeat all the way to crazy oscillation.

MODULATION: This is a very powerful feature that can achieve pretty amazing sounds. Set the repeats to the shortest (All the way lef) set the delay time as well to its shortest setting (all the way left) and then start playing with the speed and depth. You can find some amazing chorus sounds, Leslie sounds and a bunch of craziness in between. If you use this feature in its typical fashion you can achieve the lush wow and flutter of an old tape echo or remove the modulation altogether. We made this feature foot switchable so you can bring it in on the fly and take it out just as fast.

SPEED – Use this to control the speed of the vibrato

DEPTH – Use this to control the depth of the vibrato

INPUTS AND OUTPUTS: GUITAR INPUT – Mono input STEREO OUTPUTS – Lef and right outputs – the delayed notes are true stereo not dual mono so one side is out of phase. This does not affect your dry signal EXPRESSION PEDAL INPUTS – There are two expression pedal inputs one to control repeats and one to control delay time. We prefer to us the BOSS EV-5 or it’s respective like.