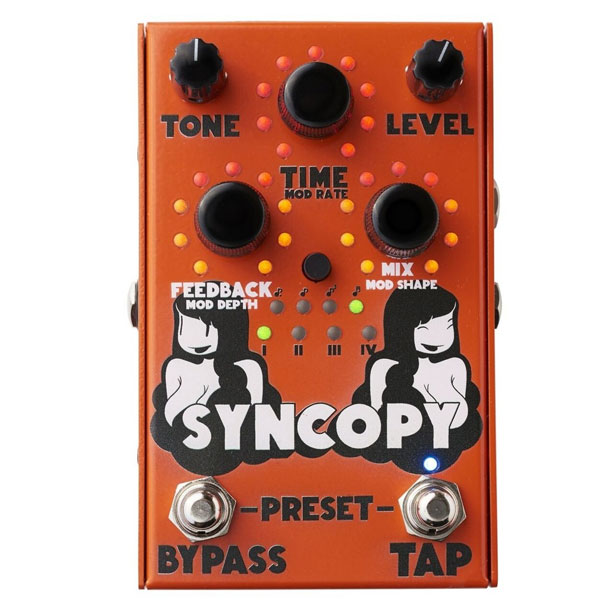 Designed for analog purists, the Syncopy is an analog delay with 500mS of pristine  and four presets that can be expanded via MIDI. What the pedal lacks in delay length it more than makes up for in playability, versatility and audio quality, thanks to the use of high-quality BBD chips and ingenious filtering that results in lush, crystal-clear delay tones. Stone Deaf uses true-bypass relay switching to reduce switching noise, and legendary Burr Brown op-amps, which are known for their superior performance.

The Syncopy has controls for Tone, Feedback, Time, Level and Mix Mod, which governs the amount of modulation—from subtle chorus to whacked-out detune oscillations. The Feedback, Time and Mix Mod controls are surrounded by ultra-bright LEDS that make it easy to see settings onstage. There is also a Tap Division button to select 1/4-note, dotted-1/8th note, triplet and 16th-note divisions, and LEDs to indicate which of the four presets are in use.

Other controls include footswitches for Bypass, Tap and Preset (Bypass + Tap), as well as an Expression Input assignable to the Feedback, Time and Mix Mod controls. In addition, the Syncopy’s four presets can be expanded to multiple banks via MIDI. Using MIDI, players also have control over tempo, tap divisions and continuous controls such as Feedback, Time and Mix.

Watch the videos below and visit Stone Deaf Effects & Amplification for more information.