Guitarists have been treated to a wealth of innovations in the world of delay effects. Originally, echo and other time-based effects could be created only by mechanical means. Analog tape devices, like the 1960s Maestro Echoplex, and so-called “oil-can” delays, like Fender’s Variable Delay unit and the Tel-Ray Ad-n-Echo shown below, used magnetic storage to record sounds and play them back in echoing fashion.

By the mid 1970s, analog delay pedals that created the effect using solid-state electronics began to appear, followed in the 1980s by digital delays that used digital signal processing (DSP). Today, companies like Boss and Strymon employ the latest DSP technology to create not only classic analog and digital delay effects but also unique varieties of echo, including bit-crushed, filtered and shimmering “frozen” delays.

Somehow, though, it seems guitarists always return to analog delay. Though the effect fell out of favor from the 1980s through the early 1990s, it began to make a comeback toward the end of the last century. Today, love for its warm, slightly distorted sound is as strong as ever, as evidenced by the numerous analog delay pedals on the market.

But what’s the source of that analog mojo?

It’s the bucket brigade device, or BBD chip, the integrated circuit (IC) responsible for creating the delay effect—as well as other time-based effects like chorus and flange—in these vintage units.

What’s a Bucket Brigade Device (BBD)?
The BBD is fairly old tech. It was created in 1969 at Philips Research Labs and works in an ingeniously simple manner.

Inside the BBD is a long line of tiny capacitors and switching transistors. Each capacitor acts as a container for an analog sample of sound, which it receives from the pedal’s input and stores as electric energy. When the signal enters the chip, the first capacitor takes a sample of the sound and then hands it off to the next capacitor, or stage, within the circuit, which passes it off to the next, and so on. This method of handing-off samples recalls a line of firefighters passing buckets of water from one end to the other, which is how the chip came to be called a bucket brigade device.

This method of handing-off samples recalls a line of firefighters passing buckets of water from one end to the other, which is how the chip came to be called a bucket brigade device.

Capacitors don’t have to immediately unload their energy. They can hold onto it for a short period of time before passing it along and receiving a new sample in their now-empty bucket. This is where the switching transistors come in—they tell the capacitors when to release their charge and send it down the line. The rate at which this happens is determined by a companion chip that acts as a clock. By adjusting the clock rate, we can set the speed at which the capacitors pass along their contents. This is how the BBD chip is able to produce everything from fast slapback delays to echoes separated by several hundred milliseconds.

Why Analog Delay Sounds “Warm”
But capacitors aren’t perfect. They tend to leak, and just like a bucket with a hole in it, they need to pass their contents along before it runs out. Even the largest-capacity BBD chips, which contain 4,096 stages, can produce delays of only about 400 milliseconds, or less than half a second. As the energy in a capacitor runs out, very little information is left to pass along. This is why long echoes in BBD delays have low fidelity. It also explains why each subsequent echo sounds fuzzier than the one just before it—there’s less data available to pass along. Note that this isn’t a problem with chorus or flange, because those effects rely on short delays, so the buckets pass their contents along quickly and with minimal loss.

Many musicians like analog delay for its “warmth.” While this is partly due to the leaky nature of capacitors, it’s also by design. BBD chips tend to be noisy. All that repeating data produces undesirable artifacts, known as aliasing, which is heard as high-frequency distortion. In addition, the clock generators that tell the chip how quickly to pass along data put out their own high-frequency whine.

To mask the noise, circuit designers have often used low-pass filtering to roll off the high frequencies where the aliasing and clock whine reside. This makes the echoes sound duller than the original signal. A number of other methods have been used to mask clock noise, but low-pass filtering is most common. Which brings to mind a worthwhile tip: If you want to make a digital delay sound more like an analog, try rolling off the high frequencies.

If you want to make a digital delay sound more like an analog, try rolling off the high frequencies.

Classic BBD Pedals
Though BBDs were invented in 1969, it took several years before they were good enough to use in musical applications. The first devices had just a few stages—i.e. buckets—and worked only on low-frequency content. They also suffered from parasitic capacitance, an undesirable condition that exists between parts of a circuit that are close together. Eventually, these problems were worked out, and by 1976 BBDs were being made with as many as 2,048 stages, allowing for smooth and rich-sounding echoes. In addition, designers found that by teaming together several BBD chips in series, they could overcome the circuits’ inherent time limitations, to some extent.

Thanks to these innovations, a host of classic effects from the late 1970s through the mid 1980s were based around BBD chips. These include delay pedals like the Electro-Harmonix Deluxe Memory Man, the Boss DM-2 delay and the Ibanez AD9; chorus pedals, including the Boss CE-1 Chorus Ensemble and CE-2 Chorus; and flangers like the Electro-Harmonix Electric Mistress and the MXR Flanger.

(Side note: Some early devices, like the Marshall Time Modulator and Boss DM-1 delay, were based not on BBDs but on CCDs—Charge-Coupled Devices. Developed by AT&T Bell Labs in 1969, CCDs work similarly to BBDs and can be used as memory, a delay line and an imaging device. Early on, CCDs showed more promise than BBDs, as they could be made with more stages, but they were also expensive. Today, CCDs are commonly found in digital cameras.)

By the late 1990s, manufacturers had begun to rediscover the magic of BBDs by building new devices around NOS (New Old Stock) chips. Today, many IC manufacturers are producing accurate reproductions of classic BBD chips, allowing for a new breed of devices powered by this vintage technology. Many new pedals use several BBDs in series to produce delay times northward of 1000ms. Today these chips are so “trendy” that a digital powerhouse like Strymon invested a lot of resources in recreating a digital circuit that perfectly recreates the Bucket Brigade – with all its character and flaws!

Want to put some analog delay in your signal chain? Here are nine modern pedals that use BBDs. – Christopher Scapelliti 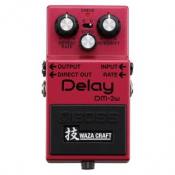 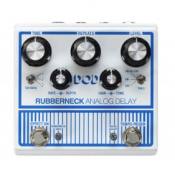 DOD Rubberneck Analog Delay
$245 - Over a second of analog repeats with tap-tempo, subdivisions, and tails. Double concentric knobs give you independent control of the Mod. Rate, Depth and Gain and Tone of the delay. Double footswitches allow for extended features like user customizable momentary control of oscillation and momentary control of the dizzying pitch sweep.
1st tap: info, 2nd tap: video
Ebay 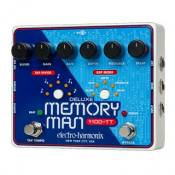 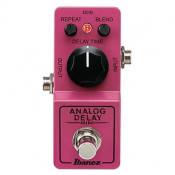 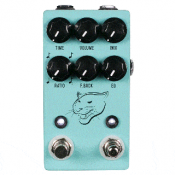 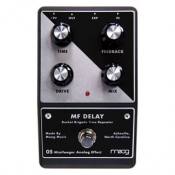 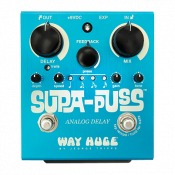 Way Huge Supa Puss
$249 - Fully featured modulated analog delay with Tap Tempo, subdivisions, and several fine-tuning options, including Tone and Mix knobs and EXP In. The “out there” Chase mode gets your repeats to cycle through each of the subdivision values. Holding the Tap Tempo button enables trail mode.
1st tap: info, 2nd tap: video
Sweetwater 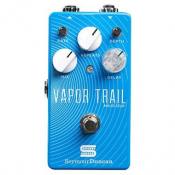 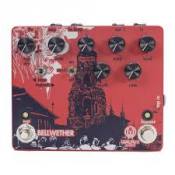