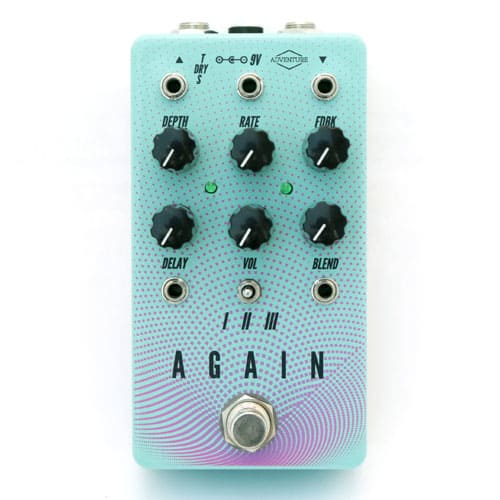 Upstate NY pedal builder Adventure Audio unveiled (and shot a video of) a fuzz at our 2019 Brooklyn Stompbox Exhibit, but, on their board, also had a prototype of another new pedal which is now ready and shipping: the Again Delay/Modulation.

The circuit itself is not as mind-bending as other Adventure Audio effects, but what makes this device stand apart from any other pedal out there is its ability to deeply integrate with modular synths (and the Eurorack format in particular) through the presence of five Control Voltage inputs:

[It’s a] classic vintage style, modulating delay […] with while adding the flexibility to control 5 parameters via control voltage jacks. […]
CV jack pairs function together. When a CV source is plugged into a jack, the respective knob acts as an offset control for the CV signal. I.E. a CV signal that moves between -1 volt and 1 volt can be made to move between say 4 volts and 6 volts if the position of the corresponding knob is set to 5 volts.

The Again is designed around a cascading system of three PT2399s, and can provide lo-fi slapback tones to long, tape-like repeats. The central toggle switch, which gives you different lengths for the delay.

Here are the videos of the Adventure Audio Again, we added it you our lists of the Best Tape-Style Pedals and the Best Pedals with CV In.

Again is the classic vintage style, modulating delay you’re already familiar with while adding the flexibility to control 5 parameters via control voltage jacks. Designed around a cascading system of 3 PT2399s, Again can provide lo-fi slapback tones to long, tape-like repeats.

Again contains a built in triangle LFO for modulation. The modulation signal is mixed with whatever CV signal is plugged into the DELAY CV jack (if there is one). The sum can then be offset with the DELAY knob.