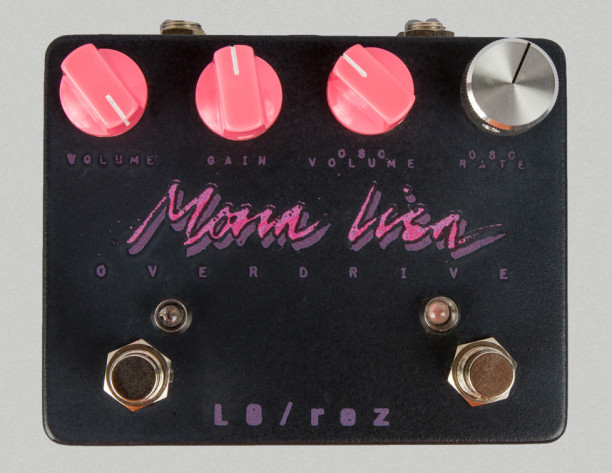 We are always excited when we find out about a new pedal manufacturer based in our hometown, NYC – there aren’t many! Enter L0/rez,  a north Brooklyn based company owned by engineer/designer Jared Hiller, that just introduced it second creation, the Mona Lisa Overdrive & Oscillation pedal.

You may have stumbled upon L0/Rez’s name in this interview we did earlier this year with avant-soul NYC  band Ava Luna, where we highlighted the manufacturer’s first pedal, custom made for the band and called Cement Lunch.

The second stompbox is called Mona Lisa, and consist in two classic-but-modded effects combined into one glorious portrait of multi-pedal vileness, without all the extra`cable connectors – and with true bypass. It starts with a rich, warm, Iommi-style distortion/overdrive tonally similar to my favorite long-stolen pedal, the Boss SD-1, with a  LOT more definition and less fizziness… more low-end grit and tons of gain.

From the (clever) video demo below I hear everything from JCM 800-style shred to eeeeevil over-fuzzed Devi Ever-esque tones, as well as the ability to emulate amp sag when the pedal is pushed to its limits. The oscillator can be used as a separate tremolo/rotary or in conjunction with the distortion, with an incredible amount of pulsing intensity available. So in short, you can use this beast for some warm, magic, classic tones, or turn up the depth and rate for a vicious machine gun style effect that could be a shoegazer’s dream.  I’d love to run this into a long delay pedal and make some intense soundscapes on my lap steel, and as always, I’m looking to free up space on my board, so this is a great all-round pedal for bluesy-but-rocky folks like me who mostly rely on OD and trem.

I’m also looking forward to running it through my modded Silverface Princeton Reverb for some futuristic Bo Diddley sounds, joining it up to a Small Stone for some Hot Rats-era Zappa or a Gilmour whoosh, and maybe a a few Buddy Miller-type rhythm pads, too.