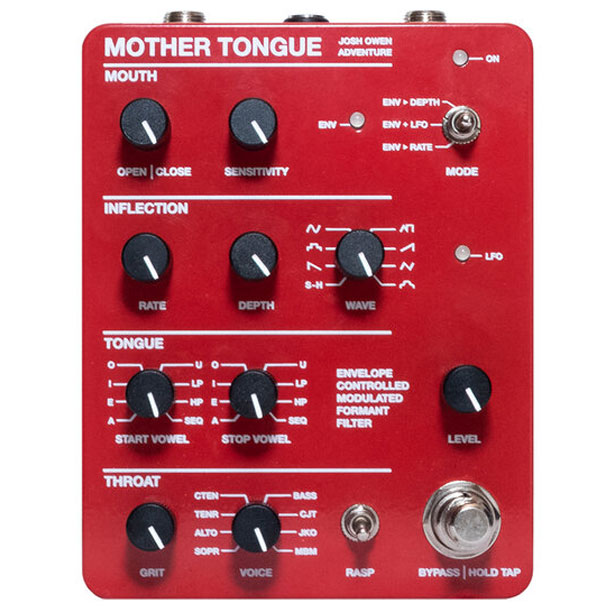 The idea behind Delicious Audio is to have a pedal blog driven by the video output of the most talented YouTubers covering stompboxes – on the assumption that all the best pedal builders will commission videos of their new pedals to them. Unfortunately, this is not always the case, as some companies (large and small) choose to produce only in-house videos. This is the reason why we occasionally miss some pretty cool releases like the Adventure Audio Mother Tongue, out earlier in 2021.

We don’t know how many pedals out there tackle the “formant filter” niche (these are the posts that feature those words in our blog), but we believe it’s safe to say that it’s unlikely anyone will find a stompbox that does a more comprehensive job at it than the Mother Tongue, a device created in collaboration with designer Josh Owen.

This envelope controlled modulated formant filter gives players an abundance of options to apply vowel-like effect to their signal, through a host of controls simulating the way the human voice works, including the dynamics of the toungue action, the filtering effects of the throat, and the vocal cords’ range.

A 3-way toggle switch let you apply the envelope filter to the modulation’s depth, LFO or rate.

As with so many creative pedals, hearing it’s what it’s all about, here’s the video of it.

Envelope Controlled Modulated Formant Filter
The Mother Tongue is a unique breed of pedal following in the great lineage of envelope controlled devices going back to the 1970’s when syncopated funk effects played a leading role in shaping the modern music landscape. Building on the automated tracking wah power it’s predecessors pioneered, the Mother Tongue adds a range of vocal-sounding modulations to the dialogue, mixing in a powerful array of controls allowing for a unique package of options for users to create some of the craziest percussive rhythms and sonic textures never before found in one singular box.