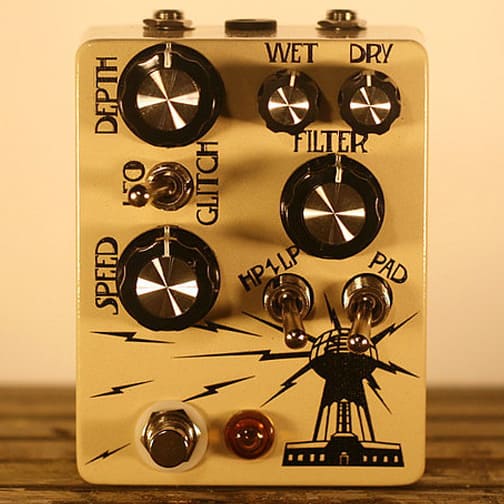 Hungry Robot Pedals is one of the few new pedal manufacturers who’s been able to catch the attention of  both guitarists and synth players through a growing range of imaginative stompboxes that are at once musical and edgy.

The company just unveiled a new Lo-Fi modulation pedal called the Wardenclyffe, after the tower of Serbian-American inventor Nikola Tesla, which could be seen as the first (failed) attempt at building a structure for wireless communication:

Inspired by Nikola Tesla’s Wardenclyffe Tower, the pedal attempts to capture the essence of one of the most mysterious and odd scientists of the century […emulating] magical lo-fi textures of early audio recordings.

The charm of Lo-Fi consists in the vintage character it adds to the audio signal, but this pedal also features a liquid/ambient quality that’s the true signature of this manufacturer’s circuits, represented here by the rich and articulate modulation and the “PAD” toggle switch, which turns on a “below-the-mix” ambient reverb that “sits just at the edge of infinite sustain.”

This device is by no means a one trick pony, being able to act as pitch modulator, vintage low pass, high pass filter, & ambient pad reverb. As you can hear from the video below by A Bunch of Pedals, it produces very intriguing results on not just on guitars, but also synths and drum machines.

The Wardenclyffe is a lo-fi ambient modulator.  It emulates the magical lo-fi textures of early audio recordings.

Inspired by Nikola Tesla’s Wardenclyffe Tower, the pedal attempts to capture the essence of one of the most mysterious and odd scientists of the century.

Depending on knob positions, it can be used subtly as a vibrato, chorus, or pad reverb… or by cranking the filter, depth, and wet knobs you can get into extremely nauseating lo-fi territory.

All elements combined, it provides all the tools you need to get that beautifully broken lo-fi texture you’ve been dreaming of.

FILTER:  Blends between filtered signal and clean signal.  Filters have a fixed cutoff frequency.
PAD:  Switches on a “below-the-mix” ambient reverb that sits just at the edge of infinite sustain.