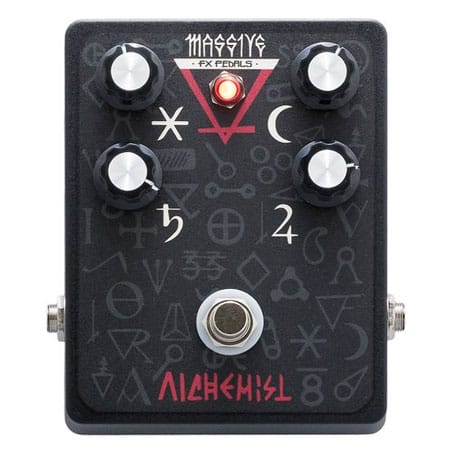 A hand built heavy fuzz the Massive FX Pedals Alchemist is the company’s take on the vintage, Germanium Burns Buzzaround from the late ’60s / early ’70s.

The pedal features an master volume knob, while the other controls faithfully recreate the ones of the original: amount of fuzz, bias  and tone.

Massive FX owner/designer Yosef Sanborn came to our Stompbox Booth at NAMM to shoot this video of the limited white edition of the Alchemist.

See more of our pedal demo shot at NAMM 2019 with 60 Cycle Hum here. We also have a list organized by kind of effect in two pages here and here.

Having now appeared a third time, flourished beautifully, and brought forth fragrant and Golden Seed. It took many long years to discover how the blood of the Red Tiger Lion and the glue of the White Eagle were to be extracted, and how these were to be mixed in their natural proportions, enclosed, sealed, and committed to the secret fire producing abundant molten Germanium ore. We have, indeed, studied the writings, parables, and various figures of the tone philosophers with singular industry, and labored hard to solve their manifold wonderful enigmas, most of which are simply the vain products of their imaginations. It was long before experience taught us that all their obscure verbiage and high pretensions are mere folly and empty phantasms, shewn and imparted to all the Sons of  G.O.A.F.
Rising from the buzz and ash of night from the early mist decades of old fuzz lore. The Alchemist hath cometh!

WTF is It?
The Alchemist is a hand built Heavy Fuzz Monster.  Dynamic Heavy Fuzz with Massive “buzzy/trebly” tones imparted by Triple NOS AC125 Germanium transistors.  Our take on the legendary and rare Buzzaround insane-o-matic fuzz sound.  Hand selected components and extensive listening to each component yields one of the most usable tone monster fuzzes to grace your pedal board.