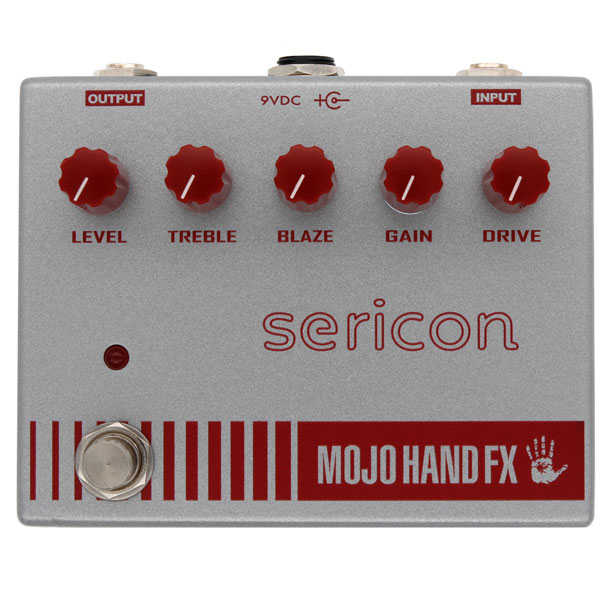 The Sericon, by Mojo Hand FX, is a device that inserts itself in the Klone saga with a very peculiar story.

This pedal’s circuit is identical to the very well-regarded ProAnalog Devices Manticore V2. The company commissioned Cusack Music (who owns Mojo Hand FX) to produce it but then went out of business and couldn’t foot the bill. Under an agreement directed by a local court, Cusack went on to finish the project under the Mojo Hand FX brand in a limited number of units that would allow the company to recoup the expenses it incurred in its dealings with ProAnalog Devices. The pedal will be discontinued when the present parts and enclosures are exhausted.

The circuit is a highly tweakable take on the most coveted of overdrive circuits: there are three gain stages, with the signal split into its two op-amp stages with separate Gain and Drive controls, featuring different voicings that allow for a variety of harmonic content. The two signals meet again at the third gain stage, aka “Blaze,” which is rather peculiar:

Here’s the “kloney” sound of the Mojo Hand FX Sericon! We added it to our uber-thorough article about the best Klon clones.

Beyond the ordinary Klone! The Sericon is a highly tweakable and interactive version of a “professional” gold overdrive.

Taking on mystique all its own, the Sericon has three seperate controls for gain manipulation. Drive affects the level of the first stage, which in turn will effect the harmonic complexity of the rest of the stages. Gain adjusts the gain of the second stage. Blaze is the final adjustable gain stage with its own unique twist. At it’s core, it’s a low-pass filter. At lower Gain/Drive settings, the filter behaves in a typical fashion you’d expect, bringing in low end warmth as you increase is. At higher Gain/Drive settings, Blaze can help tighten low end when turned counterclockwise, or add a lot more beef and thick saturation when turned clockwise.

Features:
-Three stages of gain manipulation: Gain/Drive/Blaze
-Blaze is a low-pass filter that is highly interactive with the other controls
-Treble is a post-distortion control of the high frequencies
-True Bypass
-Standard center negative 9V DC supply (not included)