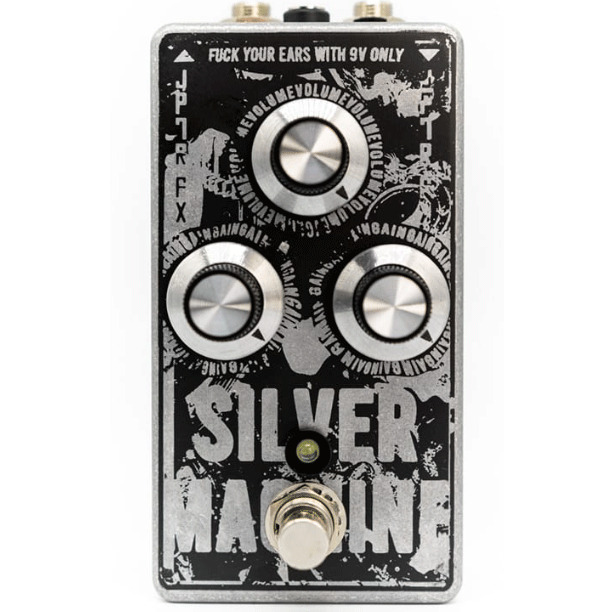 The JPTR FX Silvermachine is a fuzz built by German hands with two gain stages in a parallel circuit (controlled by the two smaller knobs) and a shared master volume.

This is a solo-style fuzz that only works well with single notes, and that, at different settings, can deliver tones reminiscent of both the Fuzz Face and the Tone Bender, but more extreme and also more open and less compressed – and with a hint of upper octave.

The circuit, which used to be hosted in a (huge) vintage-looking silvery case, in this new version is embedded in a compact case that matches the look of the other JPTR pedals.

This is how the first version of the pedal looked: 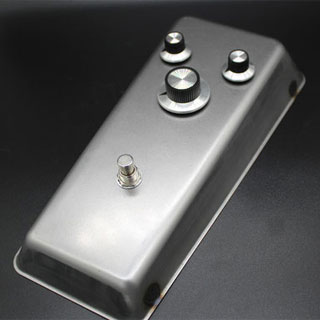 Here’s a video of it.

Iconic sounds are often a product of struggle and compromise. They are unmistakable, genuine, and have the potential to leave a mark on society.

They are bold, out of place and larger than life. They fight back, claim their prize but never abandon their humble beginnings.

Two gain stages in a parallel circuit, competing for an unrefined and unbuffered vintage fuzz conquest. With one shared master volume to keep it simple but never stupid, the Silbermaschine´s gain knobs act as a filter, delivering tones that range from sizzling drives to rich, dynamic fuzz. Pushing the gain stages even further brings out the upper octave, instantly reminiscent of Woodstock, with a twist of Beatnik club nights and LoFi Psychedelic Garage seances.

The Silbermachine retells Fuzz history in a modern iteration. Its versatility carries tones between Benders and Faces, but infinitely less compressed and deliberately open in character. A first in less aggressive gain spectrums for JPTR FX, and definitely the most versatile. Its humble looks may be deceiving, for this spacecraft can take you anywhere – past, future and present alike.

A new interpretation of a time-tested attitude.