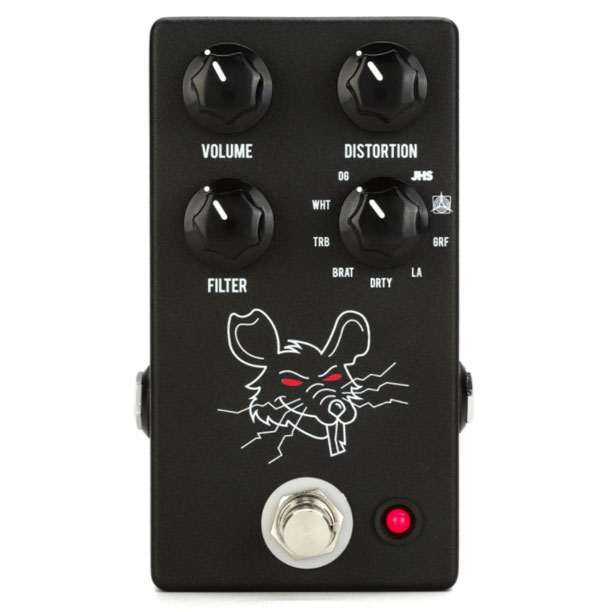 [Wanna get this baby and be supportive? Buy it through our Sweetwater or Perfect Circuit affiliate programs – at no extra cost.]

We were wondering if the novel YouTube star Joshua Scott of JHS Pedals was still actively working on new stompbox designs, considering how important (and presumably, time-consuming) the video channel appears to have become for him and his team. The release of the PackRat multi-mode distortion answers that wonderment with a resounding “yes.”

Based on the innovative multi-mode format of the TS-inspired Bonsai (which is one of the company’s best-sellers),  the JHS Pedals PackRat is a tribute to the 40+ years of RAT distortion evolution through 9 voices accurately replicating various RAT models and RAT-inspired pedals, including JHS’s popular but now discontinued mod.

OG (1979–83): First production “Big Box” models, complete with accurate Filter/Tone control rotation and taper.
White Face V3 (1984–1986): White tape RAT, with its classic tapered Filter control.
Turbo V6 (1989): Turbo RAT and its heavier clipping thanks to an LED diode.
BRAT (1997): Replicates the tone of a lesser-known budget version of the RAT (called BRAT), targeting the grunge crowd with a circuit offering both soft and hard clipping.
Dirty (2004): Dirty RAT voicing with germanium diodes delivering dense saturation and peak clip-off.
LA (1986): Based on the RAT-style voice of an Ibanez pedal called L.A. Metal, with no clipping diodes.
Landgraff MO’D (1999): This mode is based on a highly sought-after hand-made RAT-style pedal by Landgraff.
Caroline (2010): Based on the Caroline Wave Cannon, a RAT evolution.
JHS (2008–2018): Reintroducing the tone of the JHS’s All American and PackRat mods.

You can find a more in-depth description of the modes here.

Hear the sounds of the JHS Pedals RatPack, below. We added it to our article about the Best Rat-style Distortion Pedals.

PACKRAT $249
In 1978, the most versatile and influential distortion pedal of all time was invented in Kalamazoo, MI. Scott Burnham and Steve Kiraly first had the idea after playing, repairing and modifying all the available distortion pedals on the market. They wanted something that didn’t exist in the then mainstream throes of MXR, DOD and even BOSS’s product line; they wanted a pedal that could go from overdrive to distortion and then all the way to fuzz. By 1979 Scott had perfected the circuit in his RAT-infested basement workshop, and the rest is history.

The PackRat is the ultimate tribute to the 40+ years of rodent evolution and its impact on the guitar’s sound. Artists from every genre have used the iconic tones in this unassuming black box to create their sounds, including Nirvana, John Schofield, Pink Floyd, Metallica, REM, the Eagles, Jeff Beck and Radiohead.

Building on our Multi-Mode pedal series that includes the Muffuletta and Bonsai, the PackRat uses the same unique digital runway system to direct the paths of 261 components through 40 individual switches. This means that when you choose one of the nine legendary or rare modes, you are playing fully analog circuits that perfectly replicate that mode, even down to the aging components (also known as component drift). If you purchased these nine hard-to-find pedals on the used market right now, you would pay around $4,000.

When you put it that way, $249 sounds pretty reasonable, right?

1. THE OG (1979-83)
The OG mode is a perfect recreation of the first production RATs ever made. This era of roughly four years covers what is referred to historically as the V1 models.

Early V1s are also known as the Fringe Logo model and can be identified by the letters R-A-T being in all capital letters with a slight fringe graphic coming from the typeface. The V1 also has small silver capped knobs and a Tone knob instead of the more familiar and later produced V2 Filter control labeling. From a circuitry standpoint, the V1 and V2 Big Box models are practically identical except that the V1’s Tone control increases treble as you turn clockwise while the V2’s Filter control decreases treble in that direction.

When switching to the OG mode, you are activating the exact circuitry of my 1979 V1 Fringe Logo model, including the accurate Tone control rotation and taper.

Let me take a moment here to clarify: the V1 and V2 models are the exact same circuit, and simple adjustments to the Tone/Filter control can achieve identical sounds from each unit.

I know that the super nerds are going to ask why we didn’t include a Bud Box mode. Basically, I’d consider the Bud Box RAT to be a V1, because it is almost identical other than having an input buffer as well as a couple of extra parts.

2. WHITE FACE V3 (1984-1986)
In 1984, the RAT transitioned into a smaller square enclosure with a new white rectangle logo. The word RAT was in all black caps inside the white rectangle; this model gained the “White Face” RAT nickname due to this aesthetic. In 1986, this same model had a logo change that simply inverted the white and black colors, resulting in the more familiar white rectangle outline and font on the black enclosure.

This “White Face” model has gained a reputation as one of the holy grail RATs, and it even spawned a reissue in the nineties. The irony is that it is the same exact circuit as the previous Big Box V2 and the following “Black Face” 1986, as well as the 1989 RAT2. The “White Face” V3 update was a purely cosmetic change due to screen printing errors that needed to be solved. ProCo knew that the world wanted smaller pedals in the wake of brands like BOSS, DOD and Ibanez gaining more and more market share, and they wisely cashed in on the trend.

With this said, why would I put this particular version in my PackRat if it is not any different than the OG? For one, nostalgia is a powerful thing, and secondly, this mode will switch to the reverse orientation V2-V3 Filter control with an entirely different feel and experience. In many ways it widens what many consider the sweet spot for the most beloved RAT tones.

Like you, I want to believe in magic models of my favorite pedals, but sometimes the magic is just because we like the look or the user experience of one version over the other. It’s okay to admit that and move on.

White Face 023826 front.png
Turbo Rat 212472 front.png
3. TURBO V6 (1989)
The heart of the RAT’s tone comes from a design technique called symmetrical hard clipping. In this approach, a simple amplifier circuit amplifies the guitar’s signal and pushes it across a pair of clipping diodes. The result is that these diodes clip off the top of the waveform of the guitar and create a type of square wave distortion. Every RAT until 1989 utilized a typical silicon diode, just like the DOD 250 and BOSS DS-1, but the new Turbo RAT used LEDs (Light Emitting Diodes). Yup, these are the same LEDs you see in flashlights, your car’s dashboard, DVD players and almost every other electronic device on earth. This technique was a first in pedals (the same clipping style was used in the Marshall Guv’nor) and offered a completely new RAT experience.

The silicon diodes in previous versions have a lower forward voltage, resulting in a faster and more extreme clipping of the waveform. You could say this type of diode creates a very saturated tone. The Turbo’s LEDs have a much higher forward voltage, so they don’t activate or clip the signal as fast or as hard. It takes more signal to reach the point where they will “cut off” the waveform, which causes the phenomenon we know as touch sensitivity. You can set the Distortion lower, and as you play lightly, you will have an overdrive tone; dig into your guitar and play hard, and hear more clipping/distortion.

It is also worth noting that this model was the first RAT that offered the sloped enclosure that we see today. It also featured the new on/off status LED that had made its debut one year earlier in the 1988 RAT2.

4. BRAT (1997)
In 1997 ProCo got into the budget pedal game by releasing the BRAT and the Guitar Center exclusive, Roadkill. These two identical circuits with different and very nineties grunge aesthetics have the most changes so far in the evolution of this legendary circuit.

This design added an input buffer circuit and soft clipping (inside the loop of the op amp) on top of the standard hard clipping of the previous RATs. We also see a return to the opposite taper/rotation Filter control and several capacitor value changes that alter the frequency response and characteristics of the distortion.

Brat front.png
You Dirty Rat (2004) front.png
5. DIRTY (2004)
In 2002, ProCo released a 2-in-1 RAT pedal called the Deucetone. This pedal allowed you to have two completely separate RATs and activate them independently or stack them together. It also introduced two brand new sounds into the RAT topology: “Clean RAT” mode and “Dirty RAT.” Due to the popularity of the “Dirty RAT” mode, they released a single pedal called You Dirty RAT that featured that single setting in a standard sloped RAT enclosure. This circuit utilizes germanium diodes in the symmetrical hard clipping section of the circuit. This technique gives the most saturation and waveform clip-off of any version ever made.

In addition to the diode changes, this model has several different capacitor value changes resulting in a different distortion character and feel.

6. LA (1986)
In 1986, Ibanez released the 10 Series line of pedals that included three RAT style pedals. The Super Product and Fat Cat held the position of accurate and traditional RAT style pedals, while the quirkier LA Metal was, in my opinion, one of the best-modified RAT circuits of the eighties.

It includes a great input buffer, several key capacitor changes for frequency response, and no clipping diodes at all. The distortion is produced by overloading or “clipping the rails” of the op amp.

I don’t play LA Metal, and I’m guessing you don’t either, but I promise you will love this mode!

7. LANDGRAFF MO’D (1999)
Between 1999-2000, a man named John Landgraff started building pedals by hand in Pensacola, FL. Each one painted with a unique swirl paint job and wired point to point; John’s pedals were and still are the true definition of boutique and gained a reputation for sounding amazing. His most popular pedal was the Landgraff Dynamic Overdrive, a take on the Ibanez Tube Screamer, but my favorite was his distortion pedal that he called the “MO’D,” a distant cousin of the RAT and a really fantastic pedal in its own right.

8. CAROLINE (2010)
A few years after starting JHS, I purchased a fascinating distortion pedal from a brand new company out of South Carolina. I remember jumping on the phone and geeking out with the designer and head of the company Philippe Herndon. We talked about the circuit, his love for RATs and his clever take on the circuit. That pedal was called the Wave Cannon and when I started the PackRat project, it was obvious that Philippe was the friend I should bring along for the ride.

JHS Mod 403647 (2019) front.png
9. JHS MODE
In 2003 I managed a tiny guitar shop in Northwest Alabama. One day a man walked in with a vintage Small Box RAT and said he wanted to sell it. When the shop’s owner said he wasn’t interested, I said I was. I bought that RAT for $15, and this is most likely the single event that led me down the pedal collecting rabbit hole. That pedal stayed on my board for a decade, and when I started modifying and building pedals in 2007, I opened it up, learned the circuit and modded it to reflect a different kind of sound. Parts of that modification became the now discontinued JHS All American and the long-running JHS PackRat modification that we performed on thousands of RAT pedals from 2008-2018. The JHS Mode lets me keep what makes the RAT unique and add in a few of my personal favorite mods.