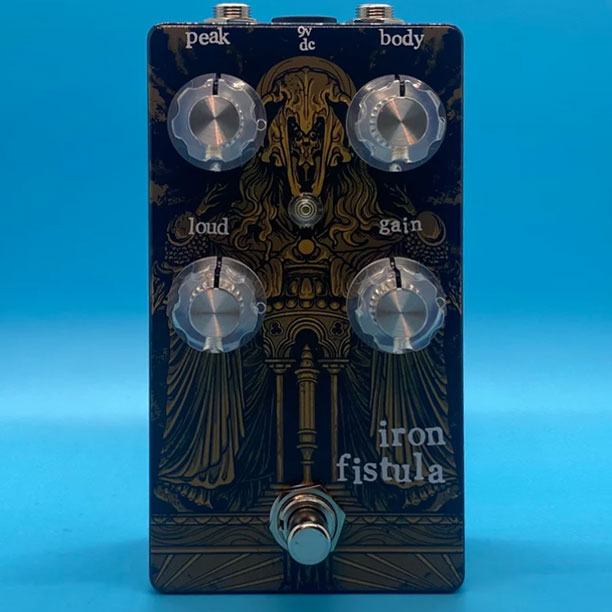 One of these is an EQ section with an active bass control (Body) placed in the circuit just before the GAIN control, which can add a hefty amount of lower frequencies and therefore has the potential to “stimulate” extra clipping, with fuzzier results compared to other similar circuits.

The Peak knob is a low-pass filter placed between the two gain stages (Loud and Gain); it’s neutral when maxed out and progressively cuts more and more high and high-mid frequencies when turned anti-clockwise.

Have a listen to thins “sorta” Plexi drive in the videos below.

IRON FISTULA is a flexible JFET transistor-based overdrive/preamp pedal, and my love letter to the plexi-drives of yore. JFETs are able to emulate tube amp saturation with surprising accuracy, making them perfect for amp-in-a-box style circuits. The EQ section sports a powerful active bass control (BODY) that is placed just prior to the GAIN control in the circuit. As a result, the two controls are highly interactive with one another in two ways — the presence of the low end will increase as the gain is increased, and the point at which BODY is set will have a significant effect on how hard the circuit clips. This can drive the circuit into a much fuzzier territory than JFET overdrives typically reside when both controls are maxed. The output of the circuit sees utilizes a passive variable frequency filter that subtly sets the PEAK of the treble frequencies, just before a JFET buffer which minimizes output impedance.

IRON FISTULA can cover a lot of ground. It has more than enough volume on tap with a low noise floor to make it an effective full-frequency clean (or dirty) boost to slam the front end of a tube amp. It makes for a perfect overdrive channel compliment to a clean solid-state amp as well, and serves as a particularly effective bass overdrive/preamp. However, the BODY control is calibrated in a way that significantly boosts low-end frequencies without muddying the overall sound by filtering out high end as a byproduct. You never knew a single-coil bridge pick up could doom with such articulation as when paired with the IRON FISTULA. When used alone, the efficacy of the PEAK control is subtle, but it proves most useful in taming the high-end sizzle that another pedal stacked before it may create. This circuit really shines as an end-of-chain stacker to help shape the EQ of the dirt being fed into it and add another dimension to your signal’s overdriven character.