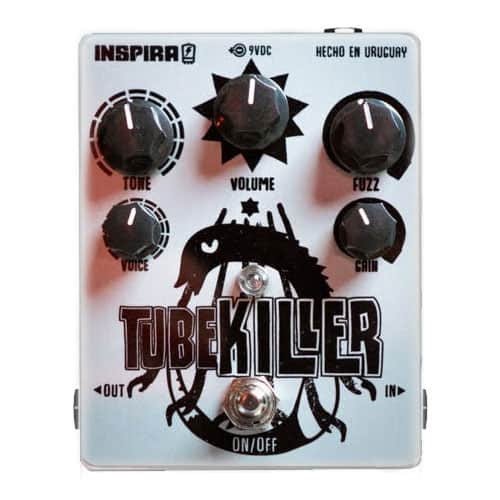 There are several hundreds of pedal companies out there who are trying to create dirt box pedals that are exquisite to the ear – and although most electric guitarists seek sublime tone, the competition in that niche is so stiff and numerous that it’s not easy to stick out from the crowd.

Nasty-sounding dirt boxes might have a smaller audience, but far fewer competitors.

Enter the Inspira FX Tube Killer, a [Broken] Amp in a Box/Fuzz pedal hailing from Uruguay inspired by the sound produced in some pre-’70s tube amplifiers while being pushed (or rather, punished) to achieve a saturation that sounded pretty nasty by today’s standards.

The Tube Killer features two gain stages (Fuzz and Gain) and Tone and Voice knobs, the latter being as an extra control on the mid-range.

Eirik from The Living Room Gear Demos had good things to say about it in the demo below.

The Tube Killer was born through the search for that characteristic sound produced in some pre-70s tube amplifiers while being pushed to achieve saturated sounds. With the tubes almost melting and the speaker about to explode, some incredible sounds were produced on these amps. Featuring its two gain stages —Fuzz and Gain— added to the Tone and Voice controls, this pedal delivers that specific response. Now abide and revisit those saturated sounds from the golden age.

Main features
Much of the character of the Tube Killer is obtained through the use of JFET transistors, with which can achieve a very similar response, both operational and harmonic, to that of vacuum tubes.

The pedal of 1000 voices
The first gain stage corresponds to a BJT transistor, which by adding a bit of its saturation to that of the saturation of the first stage of the JFET preamp, it achieves a more roaring, warm sound with greater sustain. The control that handles that stage is fuzz.

The second stage of gain corresponds to the saturation of the second stage of the JFET preamp, it is a sound that resembles more with an overdrive, although it reaches insane saturated levels. The gain control works like the volume in a tube amp, the more it increases, not only increases saturation but also the overall sound has a lot more presence.

Preamp feel
Without an exaggerated sustain in most of the settings, eliminating part of the upper end of the frequency range, plus its evil saturation structure, we achieved in this pedal that old powerful sound from the golden age. This is a pedal that ranges between a supercharged overdrive and a fuzz, delivering tones of a rebel crunch to the roars of a demon who is fighting for his life.