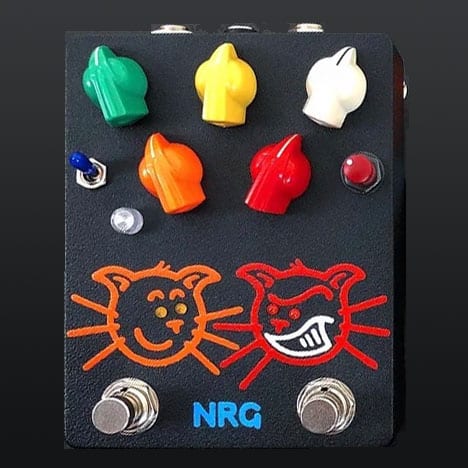 The NRG Effects Purrer is a hand-made (in the UK) Dual Channel Overdrive for the tone lovers out there. The two channels are represented as a smiling orange cat and an angry, red one – we’ll let you guess which one is the louder of the two…

Its five knobs and two toggle switches open up a universe of tonal options, ranging from dynamic and transparent low gain tones, to full, open and smooth medium gain drive.

The two channels are not stacked but feature independent gain (PURR) settings that can be alternated through A/B footswitch action. There’s also a control (sometimes a knob, in older models a toggle switch) to fine-tune the red channel’s output level.

The three knobs at the top control respectively Master out (green) Presence (yellow) and Bass (white), while the toggle switch on the right gives you three voicings with different frequency and gain response

This pedal is getting some rave reviews from selected YouTube overdrive connoisseurs – if you fancy yourself one you should probably check it out.

Ranging from dynamic and transparent low gain tones, to full, open and smooth medium gain drive. Your tone and EQ is consistent at all gain settings, with your guitar and amp’s natural qualities and response always clear and intact. Great balance and string definition at all settings.

Wide ranging and interactive controls allow you to shape your Purrfect drive tone, fine tuning to suit any instrument, pedal and amp setup.

BITE (treble) and MILK (fatness) controls can be used together to mould all kinds of original and classic tones.

Pushing up the BITE will create crisper tones with more presence and attack.

Pushing up the MILK will really fatten up the response and create more saturation at high gains.

With both rolled back, the midrange is prominent for classic drive pedal response. Around the centre of their travel you get balanced warm and clear tones.

With both the BITE and MILK controls up, you’ll get big drive tones with enhanced low and high end response and more of a midrange scoop.

Lots of volume on tap to give just the right mix, impact or push your amp really hard.

Every pedal is handmade and hand-painted meaning that each one is individual and will vary slightly cosmetically.