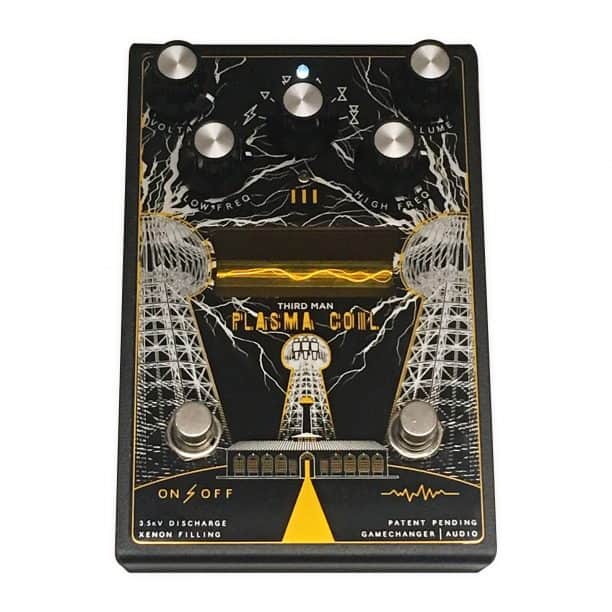 Everyone closely following the stompbox “scene” should be aware of Latvian builder Gamechanger Audio’s intriguing devices. The Plasma Distortion is an original design that employs “a series of continuous high-voltage discharges within a xenon-filled tube” to create distortion.

Third Man Record owner Jack White, of The White Stripe fame, evidently fell in love with this pedal and asked the European manufacturer to collaborate on a similar device exclusively sold through the label’s store (which already sells a pedal by Union Tube & Transistor).

This version of the pedal adds multiple Octaver-style circuits, and an additional Effects footswitch that can be toggled as latching or momentary. It also lacks the BLEND control, which in the original pedal allows you to mix back in the clean signal.

Check out the videos of the Gamechanger Audio Plasma Coil:

The PLASMA Coil is a special version of the PLASMA Pedal, created by Gamechanger Audio and Third Man Records.

At its heart is GCA’s innovative High Voltage Distortion technology that expresses audio signal as a series of electrical discharges. Even though they’ve been printing the words: “High Voltage Rock’n’Roll” on AC/DC t-shirts since 1973, PLASMA Distortion the is the first (and only) commercial musical device that literally amplifies audio signal to 3500 Volts.

PLASMA COIL takes High Voltage distortion to new heights by adding multiple Octaver-style cirquits, and an additional Effects footswitch that can be toggled as latching or momentary.

Another difference from the original PLASMA Pedal is the removed BLEND control – with PLASMA COIL the signal is always 100% PLASMA – take it or leave it.