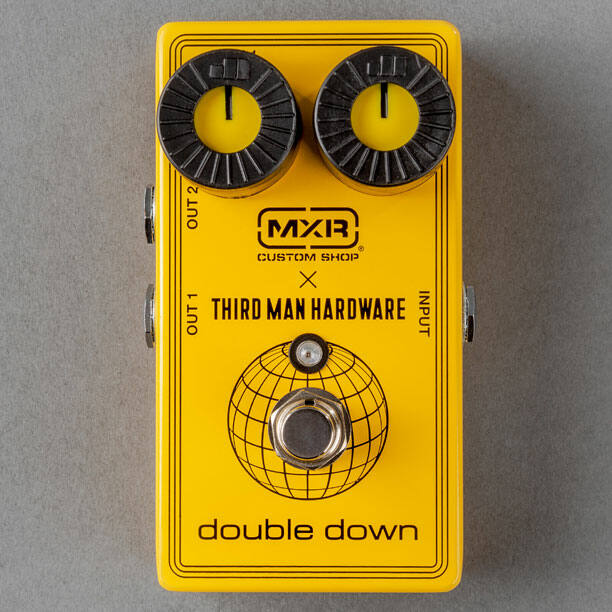 Jack White of The White Stripes’ fame continues his intriguing journey in the pedal-manufacturing arena with the release of the Third Man + MXR Double down, a stereo take on MXR Micro Amp preamp.

This is a rather simple design compared to other stompboxes released by the Nashville artist, but a useful one, in particular for guitarists who, like White, are splitting their guitar signal to feed separate effects and amps. The Micro Amp has been his boost of choice since the beginning of his career and having a two-channel version was a small dream that’s now coming true with the Double Down pedal.

Here’s the premiere video of it, featuring the man himself!

The Double down and other pedals by Third Man Records can be purchased here.

“I’m not big on the, ‘This is the Jack White distortion pedal—get that Jack White sound’—I don’t really want to sell that concept,” said White. “I’d rather try to make something useful that other people can get their sound out of.”

The music gear offshoot of White’s expansive Third Man Records universe, Third Man Hardware has made a name for itself by collaborating with some of the world’s most exciting pedal builders, including Gamechanger Audio and Coppersound.

For its latest, Third Man has teamed up with MXR to create the Double Down, a stereo take on MXR’s classic Micro Amp preamp pedal. The limited-edition yellow colorway, available exclusively on Reverb, also comes with a 6-pick guitar pick tin.

The inspiration for the Double Down comes from White’s own career. He’s used the Micro Amp as far back as the White Stripes, and for a decade or more, he’s been splitting his guitar’s signal to two different amplifiers. By putting two Micro Amp circuits into one Double Down enclosure, he now has the best of all worlds: two independent channels of classic MXR preamp gain.

“It’s very simple,” White says. “But coming in very useful in the studio and on stage.”

In our video, White demos a few ways he might use one himself: Keeping one channel clean and the other drenched in Bumble Buzz fuzz. Adding a Triplegraph on one side and Flex pedal on the other. What you make of it is up to you.