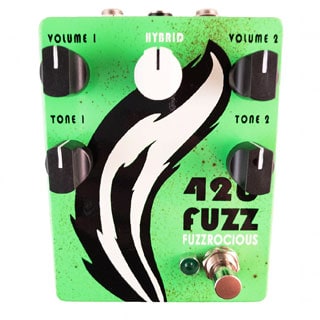 In April of 2018, Reverb.com unveiled this limited edition dual fuzz pedal by Fuzzrocious called 420 Fuzz. based on an “EL5420csz quad op-amp that creates two different fuzz circuits that you can blend together” for truly fuzzrocious results.

Videos below, more info under at the bottom of the page.

Limited in its first run to 42 units, this original fuzz boasts an EL5420csz quad op-amp that creates two different fuzz circuits that you can blend together to make one pretty blazed hybrid fuzz. Yes, we picked this op-amp because it has “420” in its name.

Fuzz 1 provides a highly sustaining fuzz and distortion with a tone stack that growls heavily in the lows and lower mids.

Fuzz 2 blows out a plume of mids-heavy gated fuzz capable of grinding up your tone from thick nugs to slick chugs.
In layman’s terms, you have two fuzzes that each sound different from one another and can be used by themselves or blended together however you wish.

Each enclosure has a different pattern in the handshaken faux keef/shake powdercoat, so no two powdercoats will be the same. Every 420 Fuzz is one of a kind!