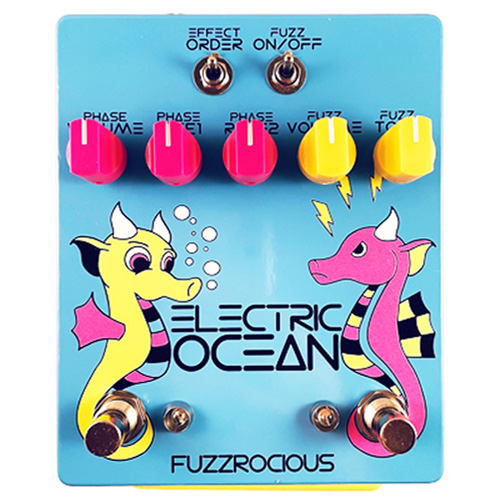 Intended as a love letter to the bulky yet legendary Roland AP-7, the Fuzzrocious | Electric Ocean is a fuzz+phaser built in collaboration with Dunwich Amplification that offers some of the most popular features of that venerable unit, with a modern angle.

Here’s a photo of the controls, slightly hidden in the top picture:

As you can see, there are separate volumes for the two effects, and a toggle switch that allows reversing their order, but the phaser and the fuzz will turn on together at once when the right footswitch is pressed (no separate footswitches, as one may expect). If you just want to use the phaser without fuzz you can turn it off with the Fuzz On/Off toggle. The fuzz has a slight mid hump that allows it to stand out throughout the LFO sweep.

The phaser is driven by an Operational Transconductance Amplifier (OTA) which gives it that classic chewy and steady sound. Just like in the old Leslie effects, you can alternate between two different speeds, set through the two Phase rates, by pressing the left footswitch.

An internal trim pot allows focusing the voicing of the phaser guitar or bass.

Hear the sound of the Fuzzrocious Electric Ocean in the videos below.

Electric Ocean is our first foray into phasers. What a trip it was to bring this to life and we’re so glad it’s here. I (Ryan) have owned the Roland AP-7 Jet Phaser a few times, but struggled with having such an expensive, heavy, vintage pedal where I didn’t use half of the features. This pedal is not a clone of, nor is it based on the AP-7, but rather a love letter to it. We’ve brought you a focused, easy to use fuzz-phaser that will keep you heard and present in the mix with all the features you need, leaving the stuff you don’t out of it.

OTA driven phaser – chewy, stable
Tight fuzz with present mids throughout tone sweep
Fuzz On/Off Toggle – you can use the phaser by itself
Effect Order Toggle – fuzz into phaser OR phaser into fuzz
Trimpot to focus the voicing of the phaser – clockwise guitar/counterclockwise bass
Top-mounted jacks
Runs at 9V DC output center negative power ONLY
Dive in. Life’s a beach with Fuzzrocious.