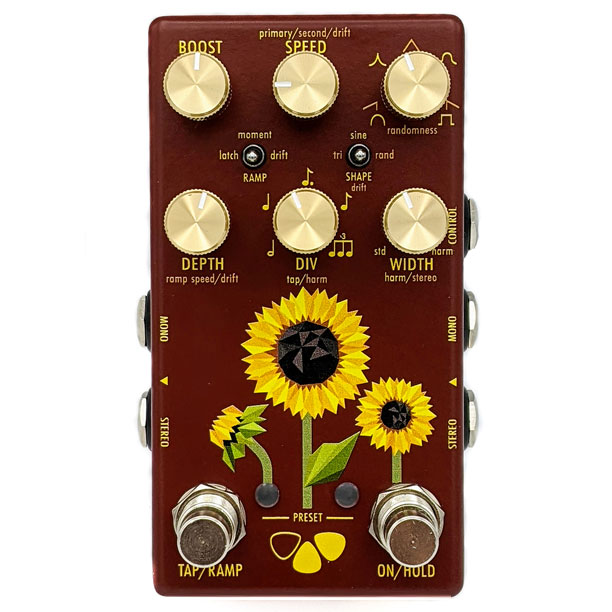 Flower Pedals has unveiled its most advanced pedal yet, the Sunflower Deluxe Tremolo.

It isn’t an exaggeration to say this is the most fully-featured analog tremolo on the market.

Do you like big yellow flowers? Do you like tremolo? Do you like any feature you can think of packed into a small form factor modulation pedal? Take a look at the Sunflower Deluxe Tremolo! It’s a digitally-controlled, fully analog signal path, stereo harmonic tremolo pedal complete with preset and MIDI capabilities!

If you’re familiar with Flower Pedals, you’re probably familiar with the Dandelion Tremolo. Think of the Sunflower as a Dandelion on steroids.  The Sunflower takes harmonic tremolo, makes it stereo, and then gives you control over more than a dozen parameters to allow you to create lush tremolo sounds that you’ve never heard before.

In addition to standard controls such as Boost, Depth, Speed, Tap Division, and Shape, the Sunflower also adds a Width control. This allows you to control the time difference between the treble and bass harmonic tremolos. Turn it all the way down to put the waveforms in sync and you have standard tremolo. Turn it all the way up to put the waveforms 180 degrees out of sync, just like a normal harmonic tremolo. What the Sunflower also allows you to do is then place that difference at any point in between, allowing you to set one waveform to just trail the other slightly, giving a more off kilter feel. This knob can also be used to set the Stereo Width in the same way. Turn it all the way down to put left and right in sync, and turn it all the way up to have them pan back and forth. By setting the Harmonic Width and Stereo Width at different points in the middle of the control, you can dial in some amazing swirling tremolo, with an almost rotary speaker-like quality to it.

The Sunflower also gives additional functionality to the Shape knob. There are now 8 different waveforms available, which are still continuously variable, but depend on which mode is selected by the Shape switch.  In Sine mode, the knob varies between 4 different waveforms, just as our other pedals do. In Triangle mode, the same is true, but between the 3 triangular waveforms. In Random mode, a random square wave is generated, and as the shape knob is turned up, the complexity of that random waveform increases.

In addition to Tap Division control now being given a knob, this knob can also control the Harmonic Division. This allows you to set different speeds for the bass and treble waveforms of the harmonic tremolo, where the note selected represents the relationship between those two speeds. In quarter note mode, they are in sync, but set it to a different mode, and the bass waveform will be slower or faster, depending on the division selected. This adds a whole new element to harmonic tremolo and opens up some new creative ways to use it.

The Sunflower also borrows a little bit from the Castilleja by adding the same 3 ramping modes: Momentary, Latch, and Drift. Momentary is the standard ramping where you can ramp to a second speed by holding down the Tap/Ramp footswitch and ramp back to the original speed by releasing it. Latch is the same thing, except that you only need to tap the footswitch to trigger the ramp to the other speed. Drift will take your primary speed and drift it up and down at a depth and speed of your choosing. You can also choose the shape of the drifting to be either a triangle, sine, or random waveform via the Shape switch.

In addition to all this new control of tremolo, the Sunflower allows you to save and recall 5 presets using the onboard footswitches.  All parameters, including both primary and secondary parameters as well as tap tempo, can be saved in a preset, which is rare for an analog pedal.  You can save a preset simply by holding down both footswitches for 2 seconds and recall or iterate through the presets by simply giving a quick press to both footswitches at the same time. The Power LED will light up in different colors to help you know which preset is active. The addition of 1/4? MIDI also allows you to control any parameter via your favorite MIDI controller.

There is so much this pedal can do and if you want more details on it’s functionality, check out the user manual or any one of the awesome demos we have. Hope a beautiful Sunflower finds it’s way to your tone garden soon!