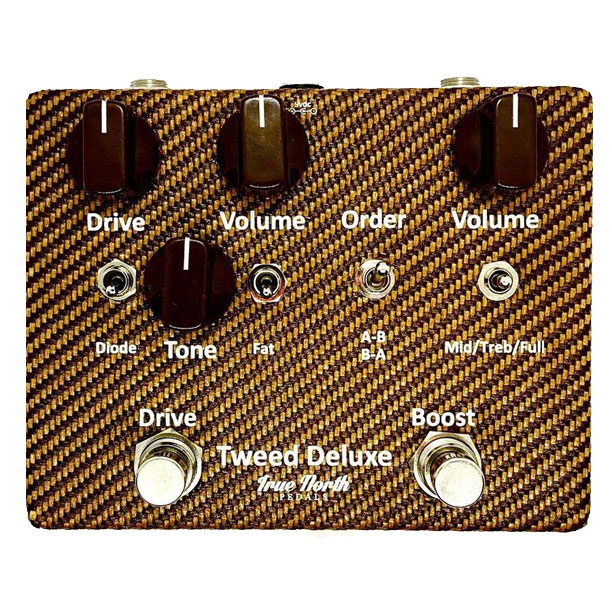 The True North Pedals Tweed Deluxe is the dual-channel drive that expands on a rather popular boutique Tweed-style overdrive pedal made in Canada. The unit was created to satisfy popular demand.

Formerly known as the Aurora Dual Drive, this pedal adds the boost side of the company’s Northern Lights (a modified treble boost so it can be a treble, mid or full-range boost) to the Tweed Drive circuit, adjusted to have a bit more headroom and to integrate better to the new circuit companion.

Each channel has its own footswitch, and a series of toggle switches allow for a variety of voicing options, including an A/B one that inverts the order of the channels.

Check out the first video of this pedal, below.

People have asked for it, so here it is! The Tweed Deluxe (formerly known as the Aurora Dual Drive)! The boost side is the Northern Lights, which is a modified treble boost so it can be a treble, mid or full range boost. The drive side is based on the Tweed Drive, but has been adjusted to have a bit more headroom as well as some eq adjustments. There is also an order switch so than you can have the drive going into the boost for a more traditional volume boost for soloing, or running the boost into the Tweed Drive to push it into higher gain. This in my opinion is where the magic is. Wait time approx 6-8 weeks.