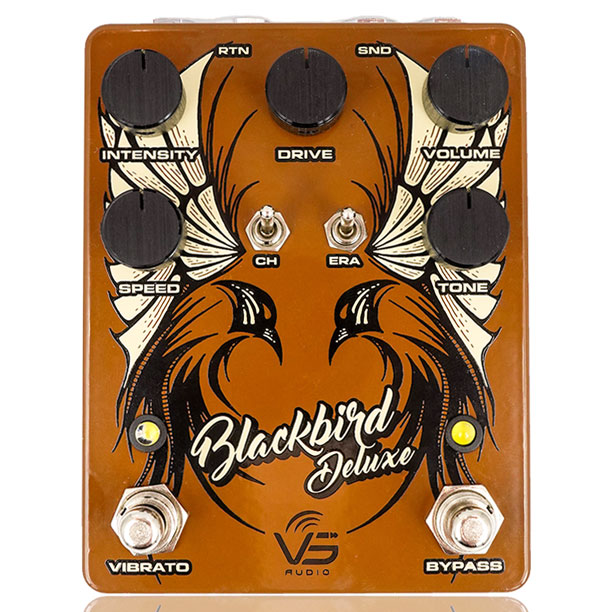 The Vs Audio BlackBird Deluxe expands on the Greek company’s Blackbird overdrive, adding several features (including a bias tremolo) to this amp-in-a-box circuit replicating the tone of Brownface and Blackface Fender amps.

Voiced after the liquid-sounding and touch-sensitive tremolo circuit of the Brown Deluxe, the Vibrato has its own separate footswitch and can be set through the Intensity and Speed knobs on the left, while all the other controls affect the overdrive, including the Era switch, which toggles between Brownface and Blackface tones, and the new Channel toggle, which provide a new Bright voice, just like in the Brown Deluxe amps.

There’s also a passive FX loop to insert other effects between the tremolo and the overdrive, and a dual-mode Bypass switch that selects between the Low Gain mode (softer edge of breakup) and the High Gain mode (adds more edge and higher output).

Adding to the company’s line of boutique effects pedals, Vs Audio effects introduces its latest offering: the BlackBird Deluxe Preamp with Bias tremolo, a pedal that succeeds in generating the iconic brown panel-style drive and works as a flexible tone-sculpting platform.

The BlackBird Deluxe picks up where the BlackBird left off. It has the same medium gain with natural compression and dynamic touch sensitive character but with more features. An added Channel switch to choose between Normal and Bright channel like the original ’61 Deluxe amp. Plus a true bias tremolo, using MOSFET and JFET technology that modulates the bias voltage of the output stage of the pedal, the same way that the famous power tube bias tremolo circuit behaves.

Bias tremolo is considered by many to be the most liquid and watery of all the tremolo types due to its natural, pulsating character. Its touch-sensitive dynamic response allows to control the tremolo effect with your picking dynamics or your guitar’s volume knob with overdriven sounds, capturing the exact tone and behavior that makes the Brown Deluxe great.