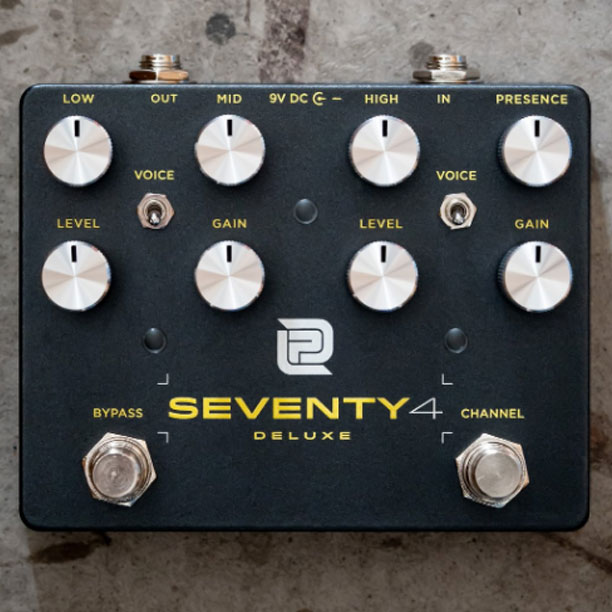 The LPD‘ Seventy4 is the two channel version of (one of) the company’s flagship Plexi overdrive, an in-the-box recreation of the full distortion delivered by Marshall Plexi and Master Volume amps from the mid to late ’70.

The two channels are not identical, with the Red one being very similar to the original non-deluxe circuit, while the Green one was created to compliment the other one with a darker overall tone – please keep in mind that the two channels cannot be stacked, but switched through the Channel footswitch.

The layout of the pedal features four shared controls on the top, featuring a 4-knob EQ section (Low, Mids, Highs and Presence) for extra tonal flavor, while the two channels have two knobs each in the bottom row for Gain and Level.

Each channel has also a toggle switch that changes voice, delivering more gain and high-mids on the Green side and more of a mid-boost on the Red channel.

We added the LPD Pedals Seventy4 Deluxe to our article about the best Plexi-style pedals.

A straightforward layout gives quick access to great tones. Individual Level, Gain and Voice controls allow tailoring the individual channels to performance demands while the global EQ provides Bass, Mids, Treble and Presence for both the Red and Green channels.