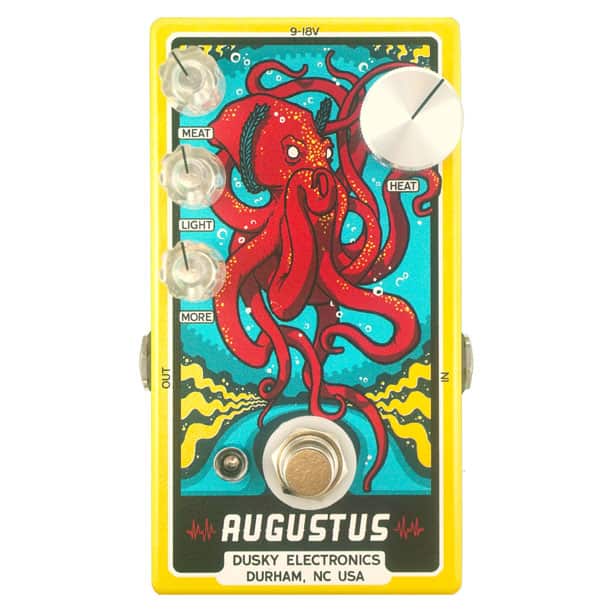 Inspired by a Roman emperor with a knack for territorial expansion and also by the Octavia Fuzz circuit designed by Roger Mayer in the late ’60s, the Dusky Augustus is a reimagined octave fuzz, whose MOSFET input and output amplifiers and high impedance input buffer make it more flexible, responsive, and dynamic than your average fuzz pedal.

Hand built in Durham, NC by Chris Rossi and sporting a truly beautiful illustration, the Augustus features four knobs, two of which are EQ controls for tone sculpting (Meat and Light), for extra flexibility. The other two – we assume – control fuzz amount (Heat) and volume (More).

Here’s the launch video. The Dusky Augustus will be shipping starting September 29.

Augustus is an octave fuzz in the spirit—though not at all the same design—as the Octavia designed by Roger Mayer in the late 1960s for Jimi Hendrix. Like the Octavia, the Augustus works by rectifying the audio signal fed into it, folding each wave in two to double its frequency, severely mangling the waveform in the process. Soaring leads, synth-like timbres, echoes of ring mod, giant robot power chords, percussive stabs—all of these and more are available with deft manipulation of the HEAT knob and your own playing technique.

MOSFET input and output amplifiers give Augustus a responsive, dynamic feel and a high impedance input buffer lets Augustus sound the same wherever it is in your pedal chain. A broad frequency response allows Augustus to sound good with any electrified instrument, so you can use it on guitar, bass, baritone, synthesizer, or anything else that makes an electronic signal.