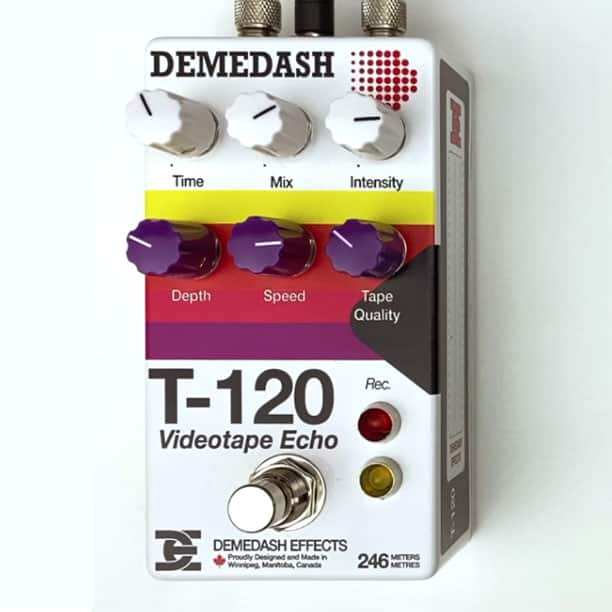 The Demedash T-120 is a quirky tape-style echo that, instead of using a revered vintage machine as a reference for its voicing, emulates the lo-fi sound of VHS tapes, described as “low bandwidth tape being fed haphazardly through a magnetic read head by an uncalibrated, unbalanced feed mechanism.” The Tape Quality knob exacerbates the lo-fi aspect, while Depth and Speed control the modulation.

There’s been a waiting list for orders since its appearance for both the regular and Deluxe (DLX) version that, for an extra $80, adds Soft Switching, Echo Trails and Secondary Footswitch, enabling swells of the echo repeats.

The Canadian builder has just released V2 of the T120 for both versions, with the following added features:

Standard: The updates to the standard include soft switching, momentary activation, and 2 added ‘secondary’ parameters (Glide & Randomize) accessible by holding down the footswitch and adjusting the ‘Depth’ and ‘Speed’ knobs, respectively.

These controls let you adjust the smoothness of the modulation transitions (from pitch jumps to smooth pitch glides), and blend between a fully periodic, standard modulating waveform and a totally random one.

DLX: The updates to the DLX consist of 2 internal dip switches (accessed by removing the back panel), which allow you to select between trails on/off, and regular or random modulation.

Here are the demos! We added the T-120 to our list of Best Tape Echo Pedals.

The Sound of Nostalgia

Inspired by the garbled audio that accompanies worn-out and poorly aged budget bin video tape, the T-120 Videotape Echo gives you exactly the type of sound that you’re hearing in your head when you look at it.

Feed your guitar through the T-120, and the recorded playback will be the sound of low bandwidth tape being fed haphazardly through a magnetic read head by an uncalibrated, unbalanced feed mechanism.

The T-120 Deluxe is offered as an optional $80 USD upgrade to the T120 for those that want more out of them. It takes the features and sound of the standard model, and builds upon it, offering several additional features:

Please note that Tap Tempo is not currently an available feature, and will not be for the foreseeable future.