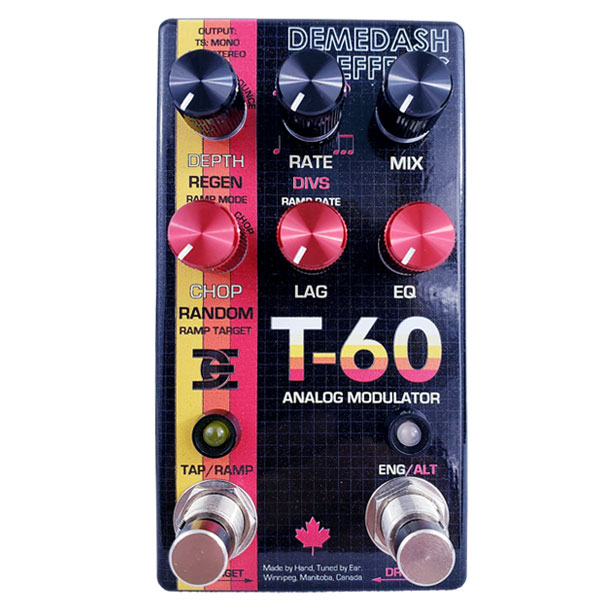 Canadian boutique builder Demedash Effects is well-known for the T-120, a creative take on the lo-fi echo. The new T-60 is the company’s first modulation pedal, an analog device with tap tempo hosted in a compact case delivering stereo Vibrato, Chorus & Flange.

The builder’s intro to the pedal instantly builds bridges with the T-12, conveying the idea that, just like that Videotape-inspired stompbox, rather than a “studio-grade” effect, this is a character pedal:

Instantly overlay a worn-out layer of stretched tape to your playing. Let it wander.  Let the years in the attic speak for themselves. Crinkles, wear and instability add character.

Based on the immortal BBD chip found in all tape-less analog delays and choruses, the T-60 employs digital technology to control the modulation, without ever having the signal abandon the analog realm.

The modulation offered by the T-60 is also a very peculiar one: there are two LFOs operating at once: a Random LFO and a Periodic LFO, which is a mix of Sine and Triangle Wave. The Random control lets you control the ratio of the two types of oscillation.

The Chop knob makes the random wave less smooth, “turning it from a gliding, wavering signal into a sequence of randomly generated square levels.”

Another crucial control is the Lag one, which is like a fluid “mode” knob that turns this pedal from a flanger (short lag) to a chorus (medium settings), to a vibrato (longer lag).

The remaining knobs are pretty straightforward, with Depth and Rate controlling the modulation’s speed and depth, Mix fine-tuning the balance of dry and wet signal, and EQ providing high/low subtractive frequency shelving. The rate can also be controlled via tap tempo footswitch, which doubles as a momentary switch for the Ramp effect when held. This can be fine-tuned through the alt functions of the two knobs on the left row (Regen and Random) accessible by holding down the left footswitch.

Hear the sounds of the Demedash T-60 in the videos below.

Instantly overlay a worn-out layer of stretched tape to your playing. Let it wander. Let the years in the attic speak for themselves. Crinkles, wear and instability add character. Get lost in the lush stereo output.

The T-60 combines the gorgeous sound of a classic analog BBD device with the as-of-yet unseen possibilities granted by generating modulating waveforms via digital means. Chorus, Vibrato, Flange and much more are on tap, and the ways you can bend the pitch of the wet path are almost unending.

One of the most feature-packed, compact modern analog chorus pedals yet created, the T-60 doesn’t take any half-measures. And a fully analog signal path means that your signal is never digitized – all effects are applied via analog means.

The T-60’s true powerhouse is its microcontroller brain and meticulously crafted and digitally generated LFO.

Two LFOs are simultaneously generated – one is fully random, and the other is a mix of Sine and Triangle wave (the proportion of sine to triangle changes with the rate, to ensure the best possible sound at any speed).

The Random control lets you mix the two LFO outputs in any proportion you like.

Chop applies a sample-and-hold effect to the periodic LFO, pixelating it and turning it into a staircase waveform – introducing little pitch jumps as the wave moves up and down. As you increase ‘Chop’, you decrease the smoothness of the Random LFO – turning it from a gliding, wavering signal into a sequence of randomly generated square levels.

Tap in a tempo.

Ramp the LFO rate or the Chop rate.

A powerful high/low subtractive shelving EQ can be set to apply to only the wet, or both the wet and dry signals lets you decide how you want to dial in your sound.

The bucket brigade clock circuit has a wide range of clock speeds available via the Lag knob – giving you plenty of options as to how much or how little latency between dry and wet signals you want (though you’ll never hear an audible delay).

Adding to this, the Regeneration control allows you to re-enforce the comb-filter effect via feedback, increasing resonance and thickening up the flange, vibrato or chorus sound.