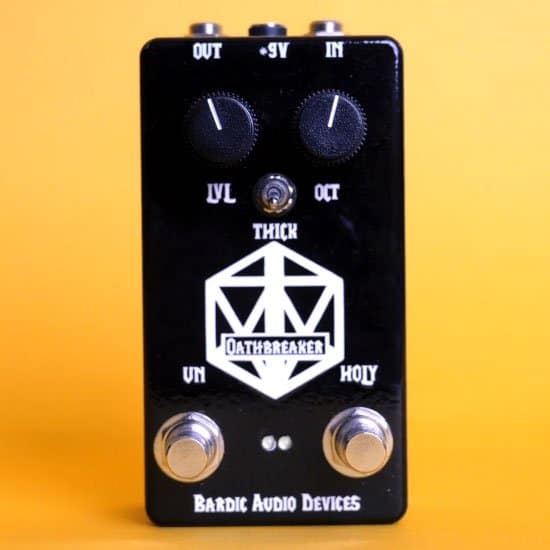 Bardic Audio Devices is an emerging pedal builder run by a young, Michigan-based developer called Tim Novak. The man is really into D&D, so we shouldn’t be surprised to find references to the role game both in the name of his company and products (“Bardics” were Celtic minstrels).

The Oathbreaker is the company’s latest distortion pedal, described as a “simplified hi-gain machine that is guaranteed to disturb your neighbors.”

It features a heavy power amp distortion and an octave-up circuit that can be engaged through a separate footswitch and blended in the signal through the Oct knob. The Thick switch beefs up the tone and cuts out some highs.

Here’s the first video of the Bardic Audio Oathbreaker.

Description:
The Oathbreaker is a simplified hi-gain machine that is guaranteed to disturb your neighbors. It contains a powerful power amp distortion that comes straight from hell. In addition to that, there is a classic blend-able octave that will allow your tone to soar straight to the heavens.

LVL: Controls the output volume of the distortion

OCT: Blends in the octave up effect. Left is clean and right is octave up

THICK: This helps to tame the distortion. It beefs up the tone and cuts out some highs