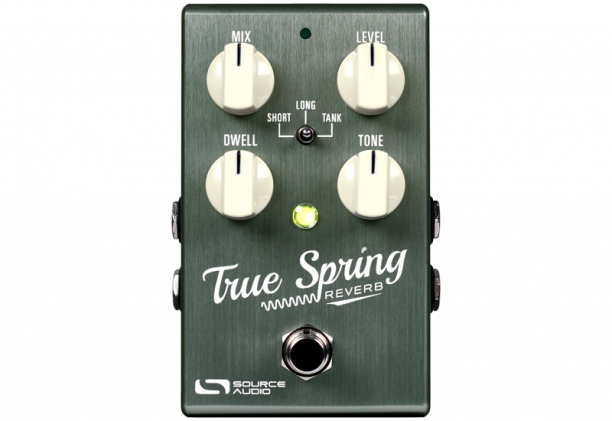 While working on their dual processor, “do-it-all” reverb pedal Ventris, Massachusetts’ builder Source Audio put a lot of effort into creating a digital spring reverb that sounded as good and as natural as the ones generated by spring coils found in vintage amps. So much so that, in the Ventris, the Spring Reverb algorithm is the only one using both processors powering the pedal.

From that experience comes the company’s new True Spring Reverb, which adopts that algorithm and builds around it a stompbox that’s  fine tuned to deliver just that specific effect.

This is a very well rounded and straightforward pedal able to deliver any spring reverb sound, thanks to three modes emulating different legendary designs:

The controls are pretty straightforward, apart from the Dwell one which simulates how hard the spring would be pushed in real amp unit, while Level is a welcome addition to compensate for the loss of volume you always get when reverb is applied to a signal.

The feature you don’t expect is a bonus Tremolo effect (inherited from the well regarded Vertigo) , which can be activated from a button in the back panel. When on, its depth can be controlled through the Dwell knob , and its rate through the Tone one, while the toggle switch gives you three different styles of tremolo (Bias, Harmonic and Optical).

With added features like stereo in/out and digital tweakability, this pedal might be a game changer in the spring reverb niche – we’ll add it right away to our dedicated article about the Best Spring Reverb Pedals on the market and the 3 Best Reverb Pedals per Type.

Hear the sound of the Source Audio True Spring Reverb in the videos below.

Source Audio’s engineering team of Bob Chidlaw and Jesse Remignanti put years of collective man-hours into capturing every nuance and idiosyncrasy of the spring reverb and tremolo effects from some of the music gear industry’s most iconic guitar amps and outboard gear. The result is indisputable sound quality with magnificent tonal depth and precision.

The Spring Reverbs
The True Spring’s reverb effects are based on a mechanical design originated by the Hammond Organ Company™ in the late 1930s. This stark design uses a pair of input and output transducers to inject an instrument’s dry signal into an actual set of spring coils and capture the very distinct reverberations as the sound bounces back and forth within the springs. Of course, Leo Fender adopted this design in the 1960s with the some of his “blackface” amplifiers and a revolution was born.
?
Short Spring Reverb: Modeled after the unmistakable twang of “blackface” amplifiers of the 1960s. After extensive research we found tremendous diversity in the spring reverb sounds of a variety of amps. Some offered a tighter, less animated tone while others sounded “drippier,” with longer sustain and livelier reverb trails. The SHORT Spring reverb engine offers a taut sound with a quick decay and smooth trails.

Long Spring Reverb: Produces long and deep reverb decays with noticeable “drip” and highly animated trails. The LONG Spring engine is not as dramatic as the TANK Reverb engine, but does offer an extremely authentic representation of some of the livelier reverb tanks found in vintage combo amps.

Tank Spring Reverb (Outboard Spring): Captures the unmistakable effect of the tube driven outboard spring tanks of the 60s. The sound of reverb tanks like the classic Fender 6G15™ are characterized by their “drippy” attack and animated trail. This original two-spring design produces a bouncing, delay like sound inseparable from the early days of surf rock and spaghetti western soundtracks.

The True Spring Reverb also allows you to combine any of its iconic spring reverbs with any of the pedal’s three tremolo effects. The True Spring’s tremolos are the same organic effects that originally appeared in our Vertigo Tremolo – the winner of Guitar Player’s “Hall of Fame 2015” and Premier Guitar’s “Premier Gear Award.”