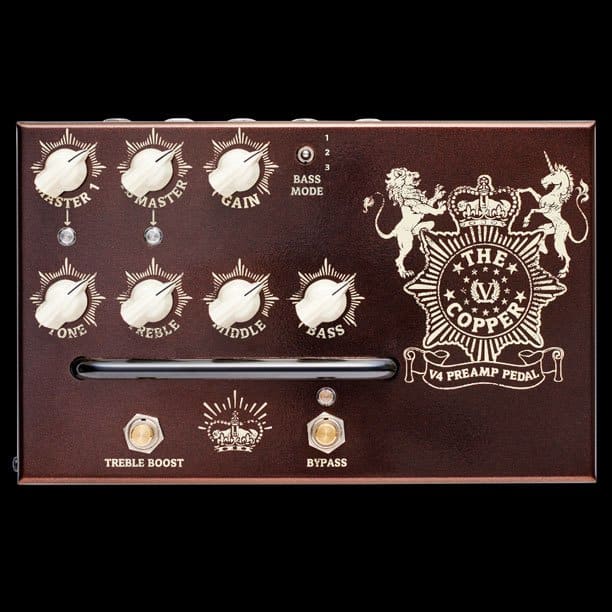 The Victory Amps V4 Copper is a tube preamp pedal made in the UK that can take over the preamp section of your amp (as long as it has an FX loop) with the handy effect of adding an extra channel to your regular setup – actually, two, since this pedal has two channels. Stomping on the bypass pedal will revert to the amp’s original preamp.

The Copper, voiced after the company’s namesake amp, shines for its clean sound, so it’s a useful device for those who have amps with not so great sounding clean channels, but, with its two gain stages, it can easily overdrive. Each of the five amp models made by Victory has now a pedal counterpart, built on the same template used for the Copper.

Remarkably, these unit features not one but FOUR valves under its hood:

The controls are pretty straightforward (see the bottom of this post for more details in that regard). Here’s the video of it, with table of content!

V4 The Copper is a pedal preamp that delivers genuine all-valve clean and overdrive. Use it straight into the front of your amp or recording interface, or alternatively use it in conjunction with your amp’s FX loop to bypass the front end of your existing amp entirely for a whole new sound experience. This is definitely no ‘ordinary’ overdrive pedal!

Treble Boost
Designed to be like a gain boost, this treble boost circuit helps to push the V4’s front end to create creamy valve overdrive and sustain. The non treble boost side goes from clean through to slightly pushed, both sides have their own volumes controls.

Remote Switching
The TRS jack gives you option of switching the pedal remotely. You can control on/off and also channel 1/2 with either a separate two-button latching footswitch or via a modern programmable switching unit. This means you can have the V4 Series Pedal Preamp off the floor and out of harm’s way.

Bass Mode Switch
Perfect for tightening your sound, there are three positions for maximum versatility. Position one on channel one gives you full bass, when switched to the treble boost side there is a bass cut. Position 2 has a global bass cut and position 3 has full bass globally.

Steel Chassis
If you’re going to be standing on it and it contains hot glass, it needs to be tough. The folded steel chassis and kick bar for the knobs means that this thing is ready for the road.

Two ways to connect
We recommend ‘Amp Through Mode’ for full functionality where you can choose to use your amp’s own front end, or the V4 Preamp via the amp effects loop. To use it as a ‘normal’ pedal or if you don’t have an effects loop, use ‘Standalone’ mode.

Live, home & studio
Put it on your pedalboard, on top of your amp or on your desktop. It’s particularly good for fly dates, or other situations when you’re not using your own amp. Just hit the FX loop return of whatever you’re using and feel right at home in no time.

Three-Band EQ
Powerful bass, middle and treble controls. These also have a significant effect on the gain character and drive levels – just like in any valve guitar amp.