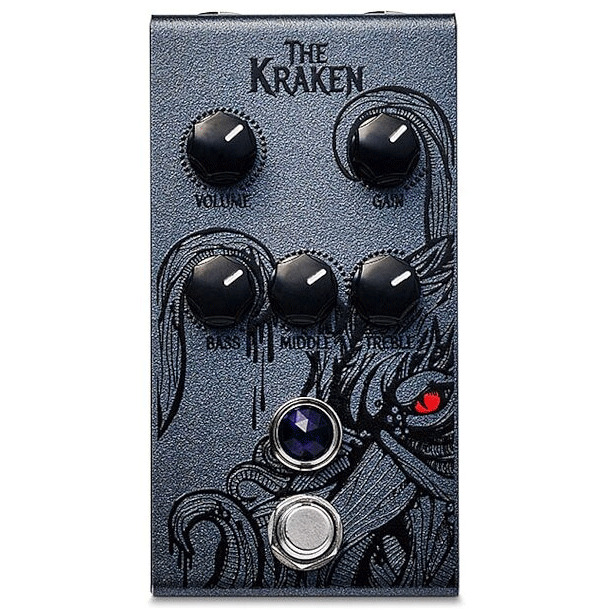 The Victory V1 Kraken is the third pedal (and the only compact one) in a series of high-gain stompboxes by UK Victory Amplification. Its siblings are a 180w power amp and a bigger preamp “V4” model.

Based on the company’s VX Kraken amp, which was born out of a collaboration with Rabea Massaad, the V1 delivers the same articulate and crisp character with dual voicing: keeping the gain down will emulate the mid to high gain British-sounding channel 1 of the VX, while pushing the gain up will convey to your tone a more American attitude with higher gain, a sound voiced after channel 2 of the VX amp.

This is a pedal that works well on extended range guitars, like baritone and low-tuned ones. The 3-way EQ section an taylor the sound to any amp or pedal configuration.

Victory and Thorpy FX collaborate to make the ultimate Victory ‘amp in a box’ stompbox based on the VX Kraken. British gain all the way through to modern American high gain sounds.

All of the Kraken gain squeezed into a pedal! Based on the VX Kraken which was a collaboration with Rabea Massaad, this V1 stompbox takes all the elements and makes it easy to add to your rig!

This V1 pedal is all about gain, keeping the gain down will give you channel 1 British Gain of the VX, then pushing the gain up is Channel 2 American high gain sounds.

All Kraken Tone
The V1 Kraken takes it’s inspiration from the VX Kraken, designed to be articulate and crisp, the V1 Kraken is perfect for high gain, extended range and low tuned players.

Gain On Tap
The V1 Kraken has a lot of gain, there is mid to high gain British sounds all the way through to searing American style gain.

Versatile EQ Control
The three band EQ on the V1 Kraken is incredibly versatile, the EQ can help to tailor the V1’s sound to any amp or set up you plug into.

HOW THE COLLAB CAME TO BE…

“The idea of a collaboration was something that made a good deal of sense, as we (Victory) were to an extent, venturing into the unknown…

At Victory, we have the knowhow, of course; however, being able to make use of Adrian’s (Thorpy’s) experience and the various subtleties of his design ethic, enabled us to better appeal to the player who likes a clean amp platform; getting their various sounds from pedals.”

MARTIN KIDD, CHIEF DESIGNER AT VICTORY
“We were keen to make the V1 pedals sound as close to the full-bore valve amps as possible but working with Martin and the team meant that we had to be even more precise to do their amp designs justice in solid state pedal form. It took a long time and many times we had to go back to the drawing board.

Despite this, maintaining an uncompromising nature of what the Victory sound is, means that pedal fiends worldwide can enjoy these pedals, no matter what their flavour preferences.

I’m proud to say we worked on these V1 pedals.”