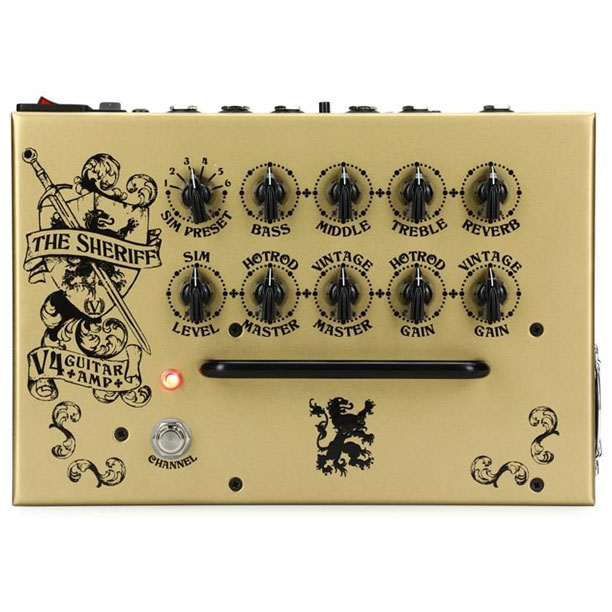 The Victory The Sheriff V4 180w Amp is part of a series of 5 power amp pedals able to power pretty much any cabinet (although you may want to be careful with 16 Ohms ones!). It is the Plexi version of the bunch and features cab sim circuitry courtesy of Two notes. Preamp-only versions of it and its siblings are also available at almost half the price of the amped ones.

Gain 1 has less gain and can be used for edge of breakup sounds, while Gain 2 delivers full-on modded ‘Plexi’ high-gain sounds.

The cab simulation, bypassed when the amp is in use, is built on Two notes DynIR technology, with 6 presets and access to 10 official Victory DynIR cabinets.

At $999, it is legitimate to expect a device that goes above and beyond, and there are indeed some intriguing extras: a 9V DC centre-negative output can power extra pedals for a maximum of 500mA. This is more than enough for the vast majority of drives, fuzzes and analog delays.

Also, the trademarked VRC circuit mimics the “resonance” or “thump” control does in the power amp of a valve amp, for extra authenticity.

The Sheriff V4 amp includes headphones out and generous routing with FX Loop, balanced 1/4? and XLR out and extra out for a channel footswitch pedal.

We added this pedal to our article about the Best Power Amp Pedals.

With two channels the V4 Sheriff amp can go from 60’s blues through to hot-rodded hair metal tones. Gain 1 has less gain and can be used for edge of breakup sounds through to classic rock. Gain 2 is full-on modded ‘plexi’ high gain sounds.

Two Channels of Classic British Overdrive!
The V4 Sheriff has two channels, the first being the Vintage channel based on the 60’s style blues rock, whereas the hot-rodded channel is all high gain from the hair metal era of the 80’s.

Three-Band EQ
Powerful bass, middle and treble controls to shape your tone. These also have an effect on the gain character and drive levels – just like in any valve guitar amp.

Reverb
Lush sounding digital reverb gives you ambience aplenty. Run it low for a subtle feeling of space, or max it out for washy, splashy hugeness! The reverb is foot-switchable using a TRS cable (sold separately).?

Two notes Technology
Two notes Audio engineering Torpedo-embedded DynIR Virtual Cabinet technology is onboard the Sheriff. The Cab Sim XLR makes is super easy to take you Victory virtual cabinets anywhere. The presets have been created by Graham Coxon for the Sheriff.

Balanced Line Out and Headphone Out
Send a direct feed to a separate speaker simulator, front of house or wherever you like. Can be used with or without a speaker connected. The inbuilt headphone output makes silent practice quick and easy.

9V DC Power Output
Want to power some extra pedals and stick this on your board? We’ve included a 9V DC centre-negative output that will put out a maximum of 500mA. This is more than enough for the vast majority of drives, fuzzes and analogue delays and so on.

VRC – Valve Response Circuit
The idea behind this little piece of the circuit is to mimic what a “resonance” or “thump” (other adjectives are available!) control does in the power amp of a valve amp. So with the V.R.C (™) circuit you get closer to how a valve power section should feel but in a tiny amp you can throw in your backpack and still get up to 180 watts of power!