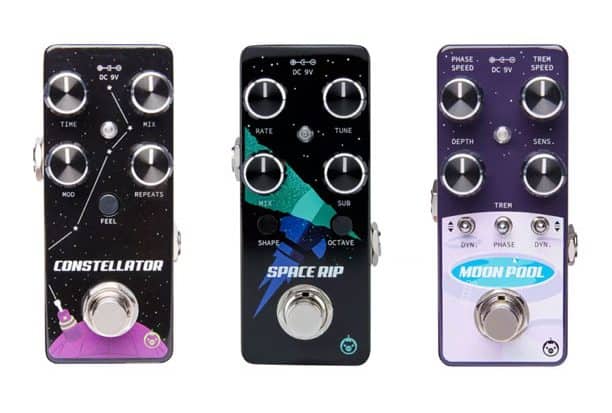 NAMM this year is being replaced by virtual convention Believe in Music, and although the presence of pedal makers is limited, some of the most established stompbox manufacturers are keeping up the established tradition of releasing (or rather announcing) new pedals during the show normally hosted in Anaheim.

NYC’s Pigtronix announced three new mini pedals with a remarkable number of controls. There are no videos of them yet so you’ll have to let your imagination run wild while reading the descriptions.

The Constellator is a tape-style, analog, BBD based echo prone to self-oscillation with a flexible modulation circuit. It can deliver up to  600ms of delay.

The Space Rip is an “analog pulse-width-modulating synth” with sawtooth and square wave voices that can be transposed by the octave. It features a Sub tone for an extra octave down.

The Moon Pool, probably the most unique of the bunch, is a four-stage analog phaser and variable bias tremolo design with independent speed controls.  The two effects can be played independently or together, for complex swirly effects, and they can also be triggered through an envelope, responding to the dynamics of the performance.

We’ll blog about each pedal when the first videos will come out.