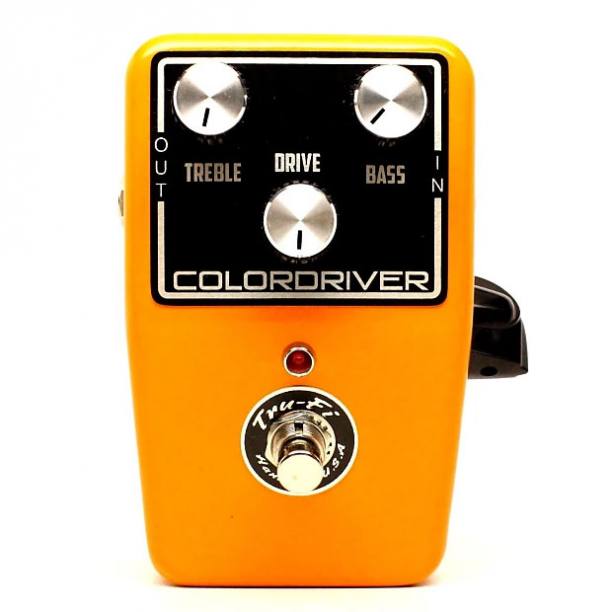 Sometimes you can tell how much a videographer likes a pedal from how good is the music in his or her video of it. Well, it doesn’t get much better than what Barrero did for the Tru-Fi COLORDRIVER 18v video below.

This is an overdrive/ fuzz made in the USA and inspired by the  Colorsound Power Boost, a rather unique vintage pedal using two 9v batteries that was used by superstars as David Gilmour of Pink Floyd, Jeff Beck, and T-rex Marc Bolan. Marketed as a “boost,” it was so powerful that it could be used as an overdrive or, at health-volume levels, as a fuzz.

Although this is an authentic recreation of the original, it features an added master volume (on the side) to tame the massive output that made the original hard to use for many guitarists, and it runs on 9Vs but the voltage is increased inside to 18v.

It’s available in a series of different colors.

The original Colorsound Power Boost was release in 1969-70 and was 18 volts using two internal 9V batteries. It was very popular and was used by such guitar superstars as David Gilmour of Pink Floyd, Jeff Beck, and T-rex Marc Bolan. The pedal was known for it’s powerful overdrive but also it’s incredible boost factor. If used directly after the guitar it could be used in a host of ways to pushing fuzz pedals, boosting signal or just balls out rocking. But it had ONE problem, before the development of the master volume mod which was later done by Colorsound the pedal was TOO LOUD. As one customer of our’s who is a highly regarded UK guitar player/producer stated to me,  it is basically un-usable it is that loud. This is why our Colordriver HAS the Master volume, it works simply and tames the beast. You want to see how loud the original was without the Master Volume, take the Colordriver and turn it all the way up. CRAZY. In 1971 Colorsound changed the Power Boost to the 9V Overdriver and this design was over ….till now.

We have produced the 18V Colordriver to a true Power Boost replica done to the correct BC184 Transistors with two major UPGRADES. One the unit runs on 9Vs but the voltage is increased inside to 18v so you do not need to run a 18V supply. Second as you expected with made the pedal have the master volume on the side so you can dial down for whatever use you desire. You want killer Beck type overdrive crank the gain and push the master volume a ting over unity and watch your guitar tone explode. You want to push your amp for a fuller tone but still pretty clean, back the gain way off, and push the master all the way BOOM. You want to push a Big Muff for a David Gilmour transparent solo tone, push the master volume up in the Muff.

These are just killer reproductions, in a enclosure that is half the size (Ting bigger than a Boss Pedal) but while unique it still hints of the original. Inside the unit you will find correct “real” transistors that just gives it the genuine sound. The beauty of these pedals is the volume pot on the side so you can really push your amp, this gives it the shine of a driven amp mixed with the thick fuzz overdrive tone you want.

What is the difference between this and the orange Colordriver ? Well the 18V will give it a tad more headroom and transparency, plus this version used different transistors so the tone will be a bit different. Will have videos shortly.

But did these come with Master Volumes ? Well no most of them did not but the old pedals are so dam loud they are almost unusable as they push your amp TOO HARD and it is hard to get a cleaner tone. So for all around use we went with the Master Volume !

These pedals are tone machines, always try to use an amp that has some mild grit, the addition of fuzz at that point is the secret to tone.

Made in the USA!