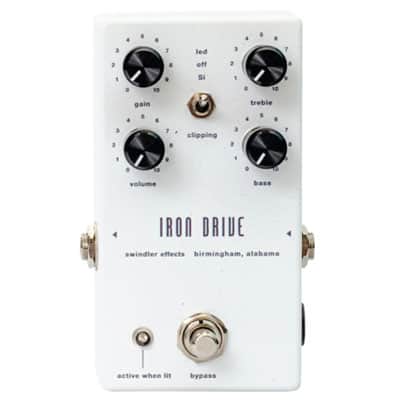 The Swindler Effects Iron Drive belongs to a series of devices the Alabama based manufacturers built in collaboration with NYC’s Matt Kraus.

The series is named Functionalist Design as an homage to the design principles of German industrial designer Dieter Rams, who advocated for better, more functional and less obtrusive consumer products. The Functionalist Series is sleek and minimal, and contains the exact same circuitry as the company’s Signature Design Series.

Swindler has partnered with New York City based designer Matt Kraus to create the Functionalist Design Series, an homage to the design principles of Dieter Rams. The Functionalist Series is sleek and minimal, and contains the exact same circuitry as our Signature Design Series.

Pure iron isn’t found in nature; it has to be blasted from a heap of oxidized minerals and dirt in a 2500? furnace. The IRON DRIVE is our take on the tubescreamer circuit, and we refined it tirelessly until there was nothing left but pure, brilliant tone.

We’ve included three distinct clipping options, separate Bass and Treble controls, and upgraded to soft touch, true-bypass switching, so the only sound you’ll hear will be the singing of your guitar.

Leaving the clipping switch in the middle position gives you a biting crunch that is just subtle enough to be dangerous. With the clipping switch set to the up or down positions, the Iron Drive is capable of supplying mountains of unrelenting tone, with grit as powerful as the iron smelters who inspired our design.