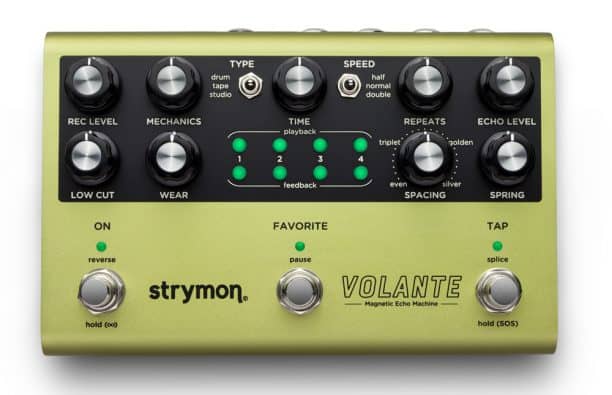 Strymon, an effect builder that will be remembered for breaking the guitarists’ skepticism about digital technology applied to guitar pedals, unveiled their delay/looper pedal Volante in early 2019 – their first pedal release in two years.

Featuring four delay playback heads with individual feedback, panning, and level controls, the Volante aims primarile at giving the modern guitarist access to three of the most sought-after vintage delay sounds, accessible through the Types toggle switch (click on the links for a demo specific to each type):

The real strength of the pedal though resides in its sound-sculpting capabilities, with four controls on the left side that allow you to fine tune the character, fidelity, brightness and age of the delay, for more or less vintage-sounding results.

Three of the four controls on the right side, and the Speed toggle switch,  affect the timing and level of the repeats, allowing complex rhythmic patterns as well as reverb-like atmospheric textures – the fourth is a vintage spring Reverb.

A ton of extra features are accessible through the three footswitches, including a Looper, Tap Tempo, Reverse and various momentary latch-triggered effects. 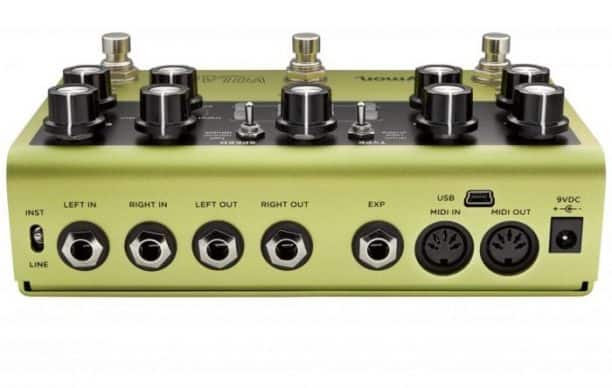 The back panel features stereo in and outs (with switch for instrument or line levels) and full midi and USB integration.

Check out the videos of the Strymon Volante below and find more info here. We added it to our Guide to the Best Delay Pedals.

Pete Celi from Strymon came to our NAMM booth to show us the Volante, here’s the video.

You can see all our videos of new pedals released at NAMM 2019 here. We also have a list organized by kind of effect in two pages here and here.