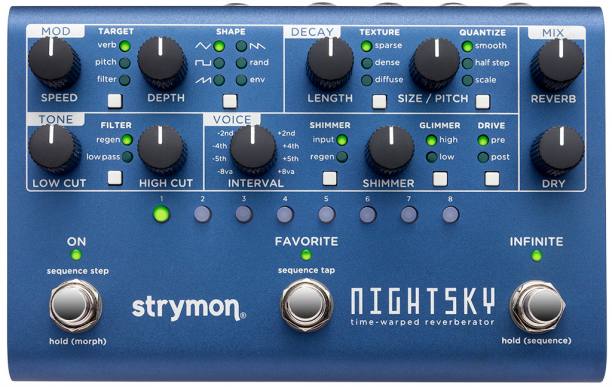 Strymon surprised everyone on the evening of September 17 by leaking news of a new pedal to be released… a few hours later during a Facebook Live video!

The device in question is the Nightsky Time Warped Reverberator, which looks like a major creative release for the Californian company that has been among the dominating forces in the pedal workstation market in the past ten years or so.

Looking at that front panel, if this baby looks to you a lot like a synth – with all those waves and filters – that’s because it is in fact a “reverberant synthesis workstation” that combines reverb, pitch-shifting, a resonant filter, modulation with multiple waves shapes (which can be routed to pitch, reverb or filter), and even a step sequencer!

There’s obviously a lot to dig through here, these first videos of the Strymon Nightsky (not “Night Sky”) will give you an idea of what it can do.

Create vast soundscapes with just a few notes from your instrument. Apply mind-bending pitch and harmonic manipulation to your reverb tails, with synth-like filter sweeps. Enter a world of new sounds that blow away the boundaries of what is possible with reverb. With pioneers and adventurous sonic explorers in mind we created a reverb pedal that can go where none have gone before.

Reverberant Synthesis Machine.
NightSky is a reverberant synthesis workstation, and a powerful, hands-on experimental sound design platform. NightSky gives you real-time continuous control of reverb pitch/processing rate/core size, harmonics, and even a synth-like resonant filter with multiple modulation waveshapes, plus a step sequencer with variable glide. You haven’t heard a pedal like this before.

New Sonic Territory.
NightSky is a reverb pedal you will want to get your hands on. Deep and powerful sound manipulation with instant response knob-tweaking and no menu diving set a new standard in experimental reverb sound design.

Warp Core Reverb.
NightSky achieves some of its most mind bending sounds by using a Variable Process Rate for its reverb core, allowing you to simultaneously change the size of the reverb as well as the pitch. This pitch change can be completely smooth, or quantized to a variety of musical scales. And it can be sequenced.

Challenge The Conventions.
NightSky evolved from a desire to push the envelope and challenge the conventions of traditional reverb while also paying homage to the experimental reverberant sounds from decades past.

It started with the variable rate core. Once that was nailed down, we knew we had to complement it with a set of sound-shaping features that could take full advantage of the unique possibilities and expand them exponentially. This led us to a full-featured modulation section, a 4-pole resonant filter, and a unique Voice section to control the reverb’s harmonic structure.