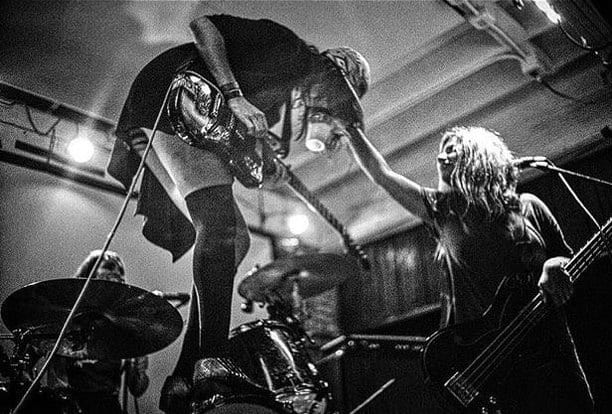 NYC-based Sharkmuffin creates punchy garage rock wrapped in a fuzzy, ’60s cool that is at once feminine and fearless. On the heels of a new album release, the masterminds behind the band, Tarra Thiessen (guitar/vox) and Natalie Kirch (bass/vox) gave us an in-depth look into the meaning behind their latest tracks, and the delicious array of pedals they use to help create their frenetic tunes. – by Olivia Sisinni

How did you guys end up playing in an NYC garage band?

Tarra Thiessen: I grew up in New Jersey, started playing guitar when I was 12, and always wanted to move to NYC because of bands like The Velvet Underground, Blondie, and The Yeah Yeah Yeahs. One of my old friends from NJ had a band called The Werewolves, and I went Brooklyn for the first time to see them play at Death By Audio in 2008. Seeing DIY shows at venues like that and other spaces in Williamsburg/Bushwick around that time made starting a garage band seem super fun, important and totally possible.

Natalie Kirch: Growing up in NYC, I often attended shows (or even snuck into shows I was underage for–sorry Mom and Dad). I also was very immersed in the Brooklyn scene once I returned to the city from college, which was/is a very inspiring DIY community. Garage rock has always been one of my favorite genres, so when Tarra and my mutual friend Nate introduced us and Tarra sent me some of her music, I was totally down to play with her. Is there anything specific (events, records, people, feelings) that acted as a source of inspiration for Tsuki?

TT: The songwriting inspiration for Tsuki is all over the place. “Space Glow” and “Sweet Tea” were both inspired by the artist/musician Nytyly (aka Miss Natalie, Donkeyskin) who is currently working on writing an animated series called ‘Waking Up.’ In the series, her best friend is the moon, which ties into the moon theme of our record (Tsuki means moon in Japanese). She was the first person I ever saw play a critter & guitari pocket piano.

“Scully is a Sharkmuffin” is obviously inspired by TheX-Files and how badass Gillian Anderson is. The lyrics come from the opening credits to the series. The bass line was inspired by my favorite Black Angels song “Science Killer.”
“Jury Duty” came about when Natalie was doing jury duty and then was finished when I ended up having to do grand jury duty for two weeks in January 2016.
“Too much Fun” was inspired by a funny argument my Dad and step mom got into over Thanksgiving where she was annoyed that my dad wouldn’t buy her a Gatorade when she was hung over because he didn’t stay out and party as late as her. The guitar + bass for “Little Bird” is Led Zeppelin inspired. I listen to Led Zeppelin II a lot, “Ramble On” is one of my favorite songs.

NK:
I guess I’ll do the others from where Tarra left off!
“Leather Gloves”: unrequited love.
“Atama”: Japanese children’s song – one of the few things I recall from a brief stint learning the Japanese language when I was 12.
“Puppy Love”: getting involved with someone dark faster than you intended to while another relationship is still unresolved.
“Factory”: a young factory worker getting involved with a predatorial factory owner.
“I Wanna Be You”: a past lover with an addiction he can’t seem to kick.
“Ghost Beads”: the end of a rocky relationship where one partner moves to the other side of the country to find himself.
“Stacey”: a woman with a sinister past and a nerdy, polyamorous west coast quad. 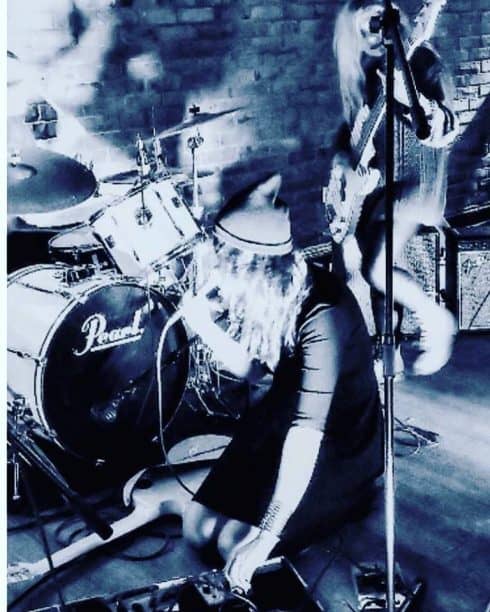 The record sounds a lot more defined and present than your previous material, how do you explain that?

TT: I was repeating similar destructive relationship patterns right before we began writing/recording this record and lyrically I didn’t want to write the same sort of angry girl garage as I did with Chartreuse. Tsuki still has its angsty moments in “Jury Duty”, “Plate,” “Puppy Love,” & “I Wanna Be You,” but I wanted to explore other vibes outside of my default “I date shitty dudes and need to scream about it” mode. NK: A lot of it has to do with maturing and our lives changing, especially in regards to Tarra’s voice and the subject matter.

The same can be said about the guitar and bass, was there a change in equipment, or in the way you use it, behind this?

TT: I used the same guitar pedals and basically the same amps as the last record, but I used a 1952 Telecaster and a 60s 12-string surfcaster on this record. I played my critter & guitari pocket piano on “Atama” and “Sweet Tea.” There was a lot of keyboard layers added by Kim Deuss on a lot of the tracks and Michelle Rose added cello to “Puppy Love,” “Leather Gloves,” and “Plate.”

NK: I used the same Series 10 bass guitar, Apocalypse Death By Audio fuzz pedal, and tuning pedal – only I turned my fuzz off or down on some of the tracks or on parts of various songs.

Is there a piece of gear that defined more than others the sound of Tsuki?

NK: Do our voices count as gear?

What’s on your pedal boards these days?

[In the board’s picture, we also see an EHX Memory Boy, a BOSS Echo Space re-201, and two more pedals we can’t identify!] 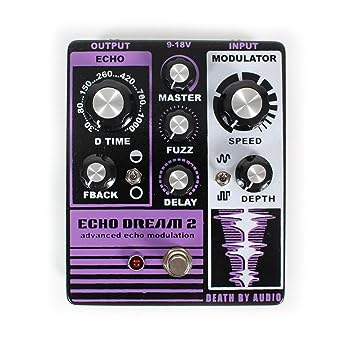 NK: My setup is pretty basic. I use an Apocalypse Death By Audio fuzz pedal and tuning pedal.

Are there any NEW pieces of gear you are intensely thinking about?

TT: I really want to put a tremolo bar on one of my guitars.

NK: I’ve been debating getting an Echo Dream pedal.

What other like-minded NYC bands do you think our readers should check out, (possibly featuring guitarists with big pedalboards?)

TT: Lindsey from Baby Acid has the most pedals I’ve ever seen anyone use, and I heard Lyzi in Fruit & Flowers just invested in a bunch of new pedals.