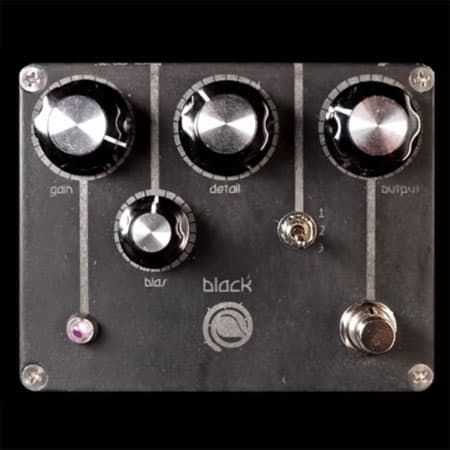 We wrote about Tom Cram in this Deli mag article linked to the 2016 Brooklyn Stompbox Exhibit. As DigiTech’s Marketing Director, at the time he was heavily involved in developing the company’s pedal releases, and was also one of the main actors behind the now widespread “collaborative pedals” trend.

Tom’s adventure at DigiTech ended shortly after the company was acquired by Samsung within the Harman takeover (the builder hasn’t released any new pedals since then). After meeting Tom at several NAMM shows and Stompbox Exhibits, we were excited to hear, earlier this year, that he had started his own company, called Spiral Electric FX.

In early November 2018, the first “petal” of this new rose was announced: the Black Rose Fuzz, a circuit inspired by the classic Maestro FZ-1S, which also influenced Digitech’s Carcosa, but based on the new Carbon clipping technology delivered by a device called Nanolog N2 – more about that here.

In line with the idea of blending past and future, the Black Rose also includes user selectable options (accessible through the 1,2,3 toggle switch on the right) that use Germanium and Silicon diodes in series with the N2 , for subtle textural changes.

Tom describes its sound this way:

The Black Rose is an unapologetically bright fuzz, and is meant to pair with an already crunchy amp/channel but it also works quite well into a clean amp/channel.

To get a better idea of the sonic goods delivered, here are some videos of the Spiral Electric FX Black Rose Fuzz.

The origin of the Black Rose Fuzz can be traced back to Chicago at the always amazing Chicago Music Exchange. I was perusing their excellent collection of pedals and I saw a mint condition Maestro FZ1-S. I took it back to their demo rooms and fell in love. It wasn’t all puppies and rainbows however, anyone who has tried an original FZ1-S knows that they are not without their quirks. But the base fuzz tone was rude, raunchy, and very ’70’s Biker Metal, just how I like my fuzz.

A very simple version went on to become the DOD Carcosa Fuzz, but I haven’t stopped experimenting with the circuit. In July 2018 I tried a modified version of the circuit with the Nanolog N2 and I loved how it turned out. It had a Germanium-esque sonic quality without the volume loss normally associated with Germanium diodes. I also must admit there is something tantalizingly perverse about mixing a vintage circuit with an ultra-modern quantum tunneling device. This version of the circuit became the heart of the Black Rose Fuzz.Black Rose FuzzI also tried several different clipping options, and settled on additional Germanium and Silicon diodes added to the Nanolog N2 – User selectable of course. These clipping diodes in series with the N2 add very subtle textural changes that I like. I’m planning on offering other clipping options on future Limited Edition versions of the Black Rose.

The Black Rose is an unapologetically bright fuzz, and is meant to pair with an already crunchy amp/channel but it also works quite well into a clean amp/channel too.
Special thanks go to Parker Coons and Robert Bird (www.pedalpcb.com) for helping me with the Black Rose schematic and PCB layout.