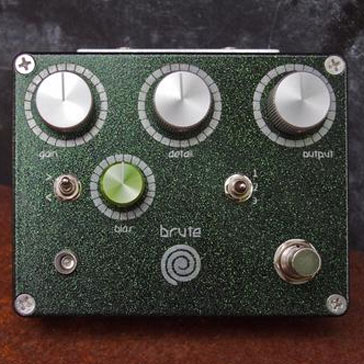 Spiral Electric FX is the project of ex DigiTech circuit designer Tom Cram, and the Brute – unveiled at NAMM 2019 – is a muscular and dark fuzz pedal designed for the needs of guitarists with bright amps who want to have a bassy options. It features a complex circuit including Silicon BC108B transistors, a Nanolog N2, mixed with Russian 1N34A Ge diodes, and modern Si diodes on the Texture Toggle.

Although delivering ground shaking lows on single notes and power chords, the Brute retains enough clarity for complex chord-voicings, and the Focus Toggle tames the low-end just enough to keep it from getting woofy.

Here are the videos of the Spiral Electric FX Brute.

The Brute is a synthesis of everything I’ve learned while experimenting on the Custom Artefact, Blush, and Demhe fuzzes; refined into a vintage-voiced tonal powerhouse.

The Brute features Silicon BC108B transistors, a Nanolog N2, mixed with Russian 1N34A Ge diodes, and modern Si diodes on the Texture Toggle.  A handy low-cut on the Focus Toggle, entirely re-voiced Detail and Bias controls, green LED, and a top that glitters like the Hulk at a discotheque. The Brute is a tough, muscular, and darker fuzz than the Black, but still bright enough to stand out.

I’ve gotten many comments from customers who wanted a darker fuzz for their brighter clean-channels, or for their Fender heads and combos.  The Brute’s darker voicing and burly mid-range tackles this application perfectly.  The Brute still has enough clarity for complex chord-voicings, but also some serious weight for punchy single-note leads and riffs.

To help tame any overly bass-heavy settings you will undoubtedly find, I’ve also included a Focus Toggle that shaves the low-end just enough to keep the Brute from getting woofy.  The Focus Toggle also works well for lead work when you want stand out in a dense mix.